THE EFFECTS OF AGGRESSION IN CHILDREN 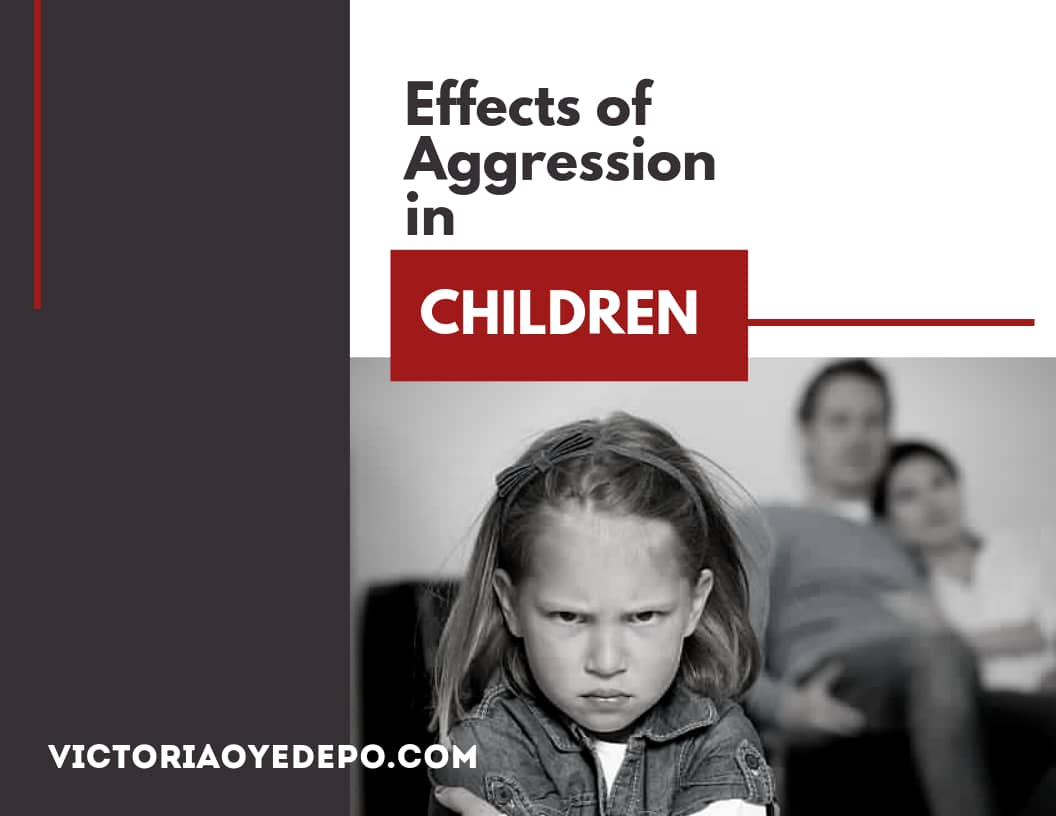 So, I was in the mall two days ago and came upon a father and daughter in what seemed to be like a scolding session. What I noticed immediately was how angry the girl looked while the father looked like he might give up. The girl crossed her arms over her chest,  stared angrily at nothing in particular with a stoic expression.
On the other hand, the father raised his arms in exasperation after staring at her for some seconds. He said “Till when will you continue this attitude? I’m trying you know but you just won’t talk to me”. It was then it dawned on me that communication between them was way too bad. Judging by her looks, I’d say she was just growing into early teens. What could have been the matter? I’ll tell you. That girl was seriously in an aggressive phase.
Aggression usually is feelings of anger resulting in harmful social interaction, hostility as well as causing damage to another person. According to some social psychologists, Baron & Richardson 1994, aggression is a behavior that is intended to harm another individual who doesn’t wish to be harmed.
Often times, we associate the word “aggression” with those who yell at each other, throw things across the room to release frustration or anger. However, these acts can’t be termed aggression because there’s no real INTENT to harm another person. Making reference to the story above, it’s obvious the daughter is deliberately refusing to listen to her father for one reason or the other while at the same time showing her displeasure.
In children or early teens, aggression can come in the form of many acts such as angry outbursts, bullying others perceived to be weak, biting, hitting, or kicking and the likes. Sometimes, when children get bothered about something, they’d rather communicate it through aggression especially if they feel they can’t trust their parents or guardians. Some may become aggressive when faced with a big challenge.
Bob Keeshan said “Parents are the ultimate role models for children. Every word, movement, and action have an effect, no other person or outside force has a greater influence on a child than the parent.” The cause may also be from parents who don’t have nor create time for their kids or those who verbally and physically abuse their own children. All these are reasons for aggression in children. In addition, environmental factors such as the neighborhood, friends or even teachers at school may trigger aggression in children.
Below are effects aggression can have on children
1. Low Self Esteem: 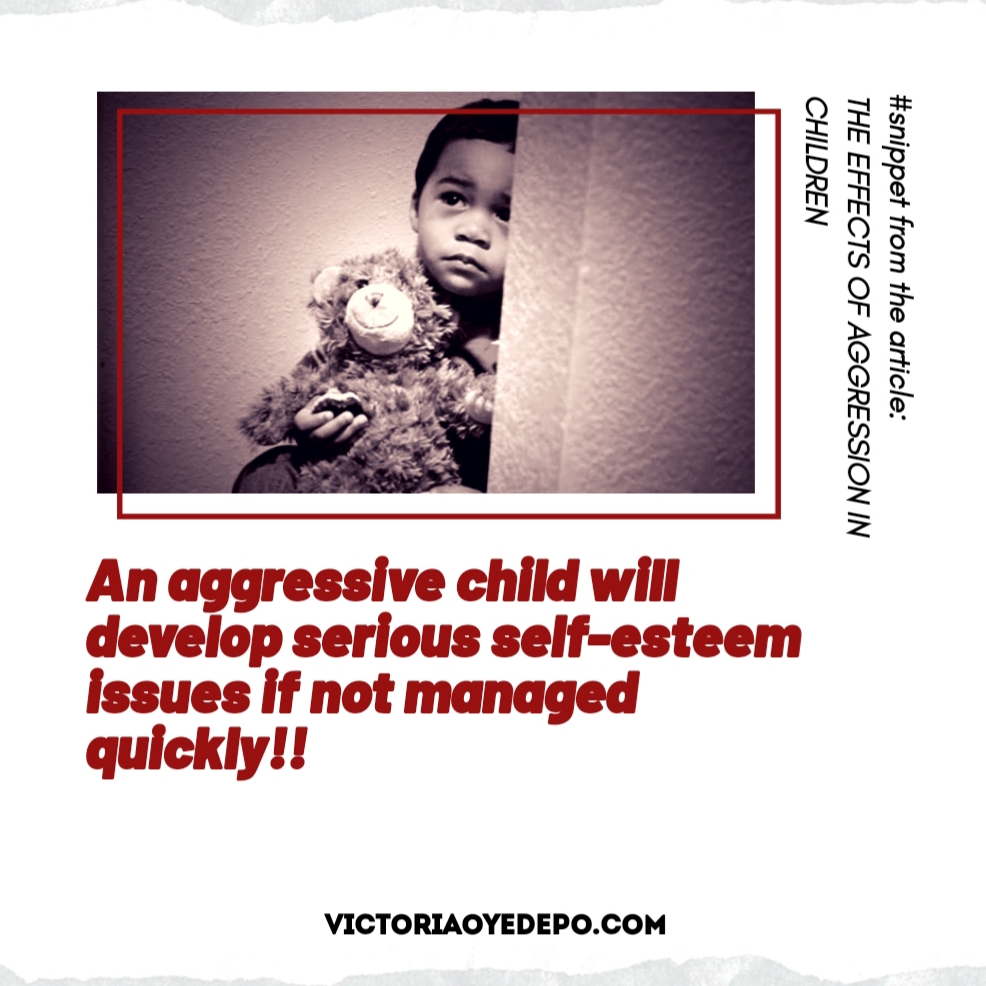 An aggressive child will develop serious self-esteem issues if not managed quickly. On the outside, you’ll see an angry child who might seem to be very sure of him/herself. But the truth is, that child is very vulnerable inside and lacks confidence. The only way to mask this is to continue being aggressive. For instance, a child who bullies another that seems gentle or weak will continue doing so because he has someone he thinks he is superior to. Left alone, an aggressive kid will likely not be confident enough to speak up in public, participate in challenges set up in schools and many others. 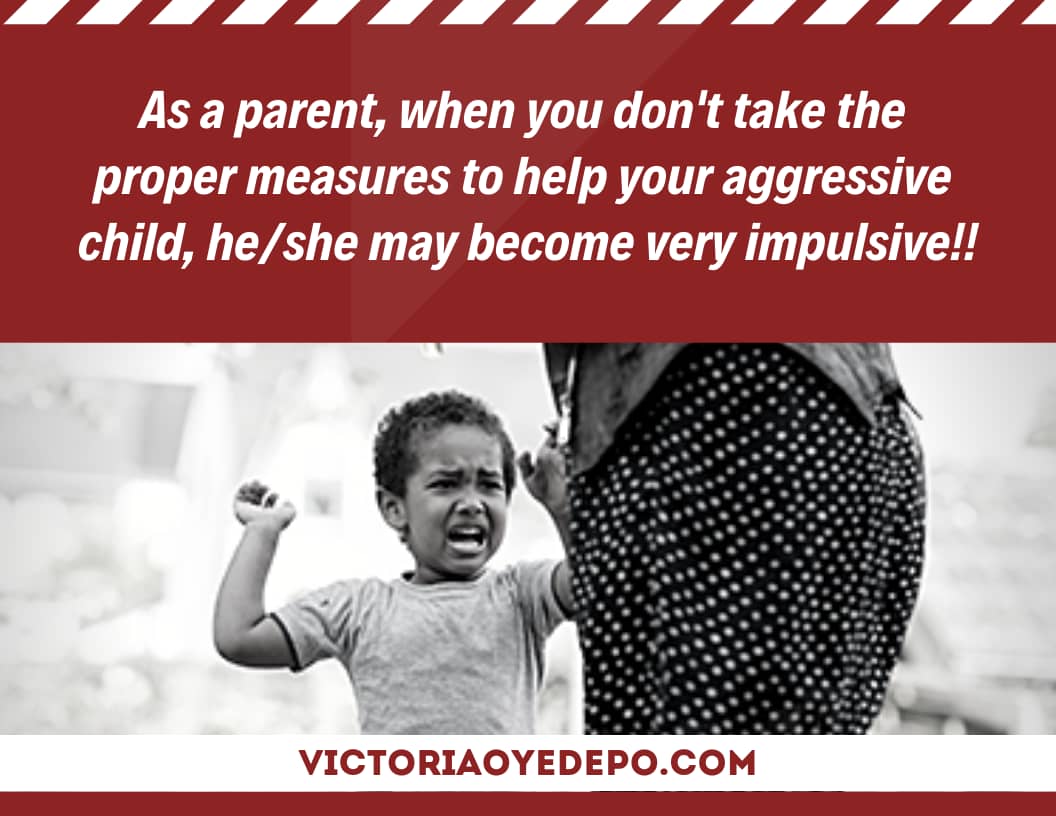 Naturally, parents are meant to always be watchful of their kids. Not just provide, shelter, food, and education but really see into them. As a parent, when you don’t take the proper measures to help your aggressive child, he/she may become very impulsive. He/she might take actions without giving a thought to the consequences and as such, make wrong decisions.

3. Lack Of Trust:  Another effect associated with aggression in children is lack of trust. He/she might never be able to come up to you to voice out issues affecting him/her. Not even your opinions would be sought out in some things.
It’s just not enough that you provide for your children. You have to study them to know how best to deal with them. Some parents rely mostly on verbal abuse and physical punishment/beating to correct errors. What majority of us fail to realize is that those methods rather than solve the problem, worsen it. This kind of methods won’t stop your children from being aggressive. You have to seek advice from relevant people, read books and continuing showing unconditional love to stop your kids from being aggressive.
If you enjoyed this article kindly go-ahead to give me a thumbs up in the reaction section👍👍 below. You can take a step further by dropping your comment and sharing the article after reading. Thank you.

QUESTION OF THE DAY

A GOOD NAME WILL SHINE FOREVER

FUN THINGS TO DO AT WHISPERING PALMS RESORT IN IWORO, BADAGRY

IS READING ACTUALLY THE MOST INTELLECTUAL TYPE OF LEISURE?