THE ADVERSE EFFECT OF PHYSICAL CORRECTION IN A CHILD 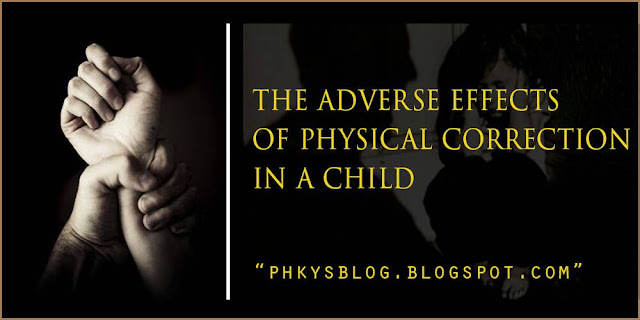 The most dangerous person to hurt/ offend is a child. When spanking is repeated over and over, one message is driven home to that child, ”You are weak and defenseless.”
I am putting up a caveat on this piece as I have never been a parent and so there are some things I don’t know about parenting yet, but there are some things that are self evident such that you don’t need to be a parent to understand.
A child is known by his doings. Every child has a doing. Don’t look down or trivialize their doings. Their doings is their unique and remarkable side.
A friend shared with me what her mother did to her when she was young and she never forgot it since then. The subject of discipline often arouses controversy regarding the spanking of children as a method of discipline. The manner in which you choose to discipline your child is a personal one. Every child is different and parenting involves finding what works for your child.
According to cognitive psychologist, Jean Piaget, children are active thinkers who constantly try to make sense of their world.

As the child of  Nigerian parents, I was certainly subjected to various punishments and some beatings as I grew up, and the truth is that I see the merits of strong discipline. In fact, I have resolved that I will certainly smack my children when the time comes because I believe that sometimes that sort of response is necessary- but only sometimes and even then, with moderation.

Parents and people in authority have the responsibility to instill discipline on those under their care. However, physical correction is just one of the many ways to discipline a child. A  parent must weigh their options very carefully, and always have an open an heartfelt conversation with the child in order to encourage understanding, respect and learning.

I love children, and not just when they are cute and loving, but also when they are bratty and annoying. Even when I get fed up with them and I just want to make them sit in a corner all day, I still love them. It is important that we as future parent and parents refrain from child abuse.

I am sure my christian folks will come with ”spare the rod and spoil the child” bible verse. They feel that if they don’t spank, they will commit the sin of losing control of their children.

Children are also active thinkers and they hardly forget. A friend of mine who actually inspired me into writing this post asked if physical correction is subtly the foundation on which domestic violence is built upon. To a large extent I think so.

1. Children aren’t encouraged to discuss issues with their parents; their attempts may be thwarted. No child wants to talk to their parent about something they did bad for the fear of been beaten or punished.

2. There may be decreased creativity, an increased risk of low self-esteem and stress levels as well as inflexible thinking; this is due to excessive pressure from their parents.

3. It increases aggressiveness and chance for depression leaving them with heavy hearts and troubled minds.

4. They replicate violence. A child who went through so much painful punishment may have a tendency to become violent to their peers and other people. They may even fight back authority.

5. They become prone to abuse. At the height of anger and frustration, a parent may cross the hairline difference between loving discipline and hateful discipline. The result is an abused child, and not a disciplined one.

Children who are victims or otherwise scarred by child abuse end up with deep seated issues that manifest in ways that are not even aware of, well into when they become adults. Girls who become women that grew up with child abuse are likely to fall into relationships with abusive men and men who are subjected to abuse end up inflicting the same on their families. And the vicious cycle needs to stop.

Children are to be corrected in love. Always remember that damage done to the psyche of a child often lasts a lifetime. At the end of the day, your job is to raise children into adults that contribute positively to society, as cheesy as that may sound, I believe it.

I STAND AGAINST DOMESTIC VIOLENCE

WHAT DO YOU VALUE IN FRIENDSHIP?

IF YOU COULD BE ANY FOOTBALL PLAYER, WHICH WILL YOU BE?

QOTD: QUESTION OF THE DAY