MY FIRST VISIT TO ABEOKUTA: A GUIDE TO TOURING OLUMO ROCK 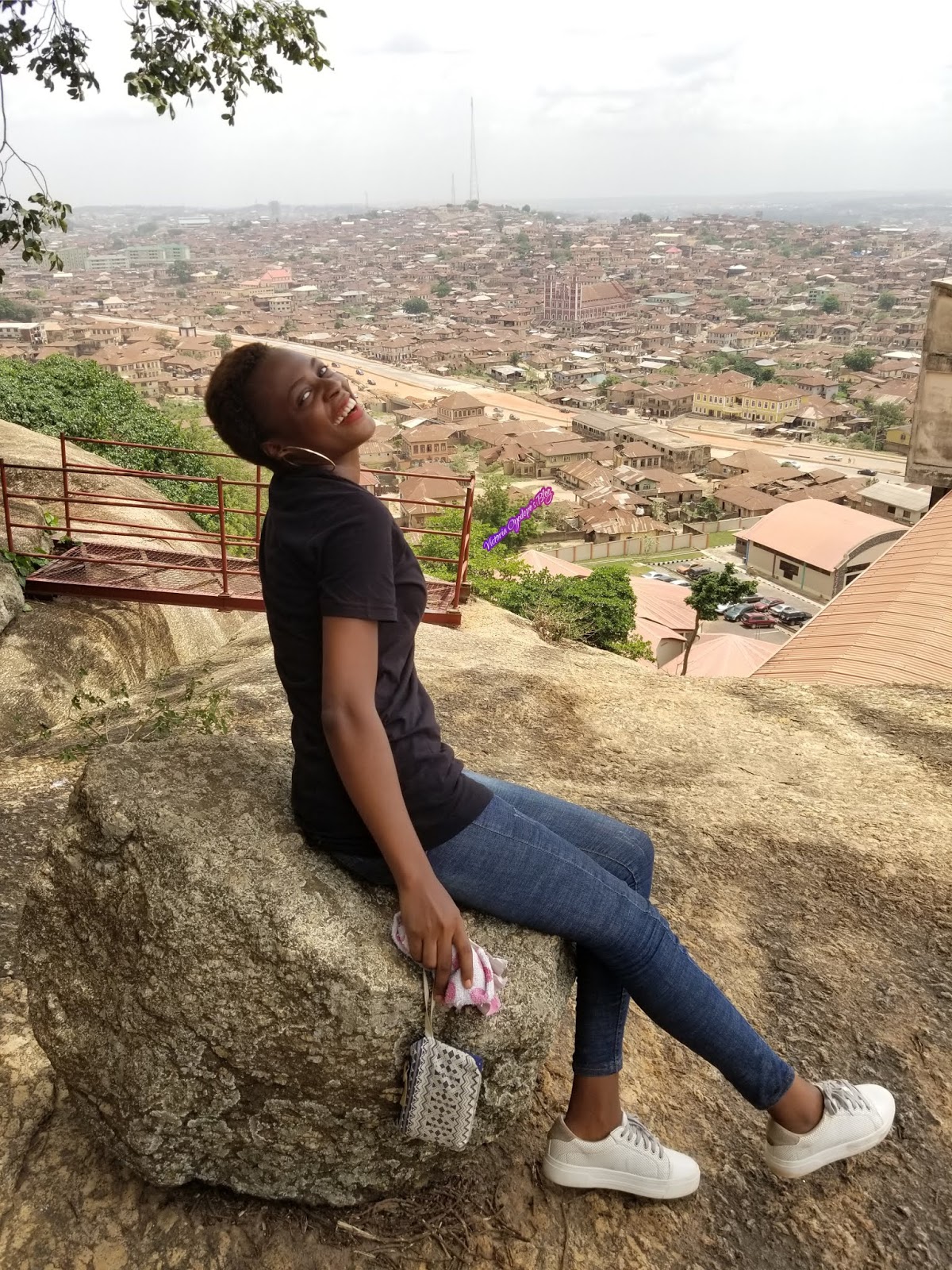 While growing up I heard stories of Olumo Rock and always itched to visit. This year I thought to include a visit to Olumo Rock in my bucket list. I will like to say this early before you go deep into reading and viewing the pictures that climbing this rock is not for the faint-hearted (honestly, I was scared as hell). 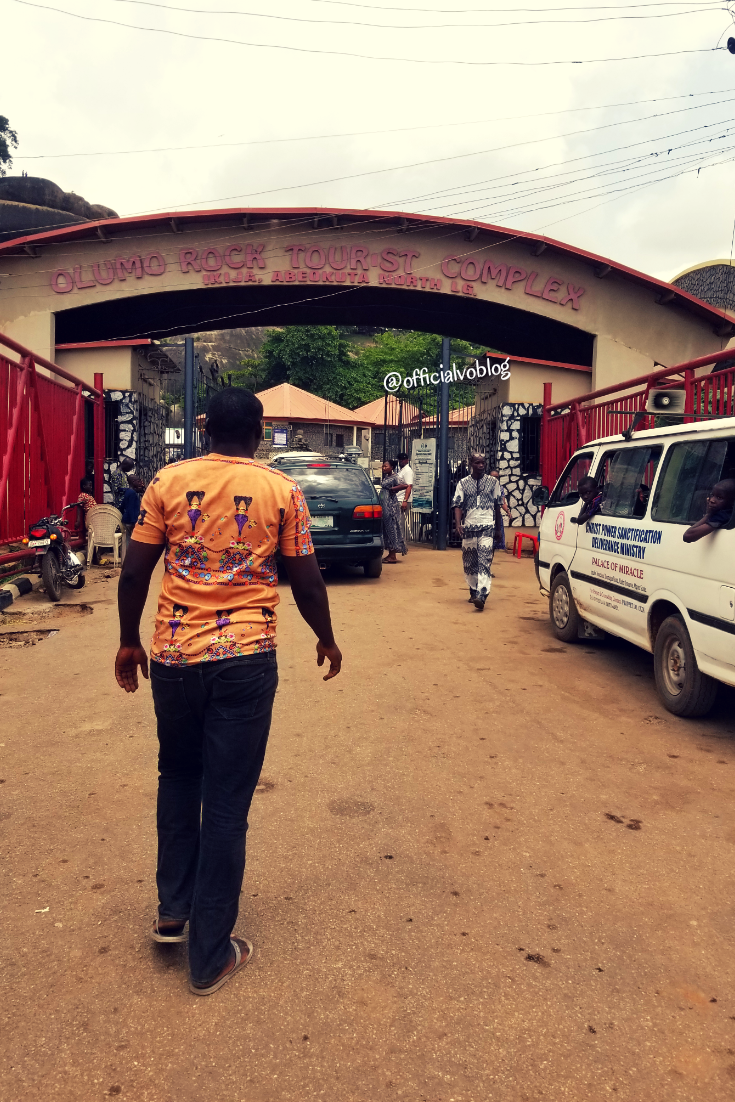 The entrance fee to Olumo Rock is 1000 Naira, which is for those of us who would be climbing the stairs. It was a busy day at the Rock when I visited. I met other tourists here. Both foreign and local 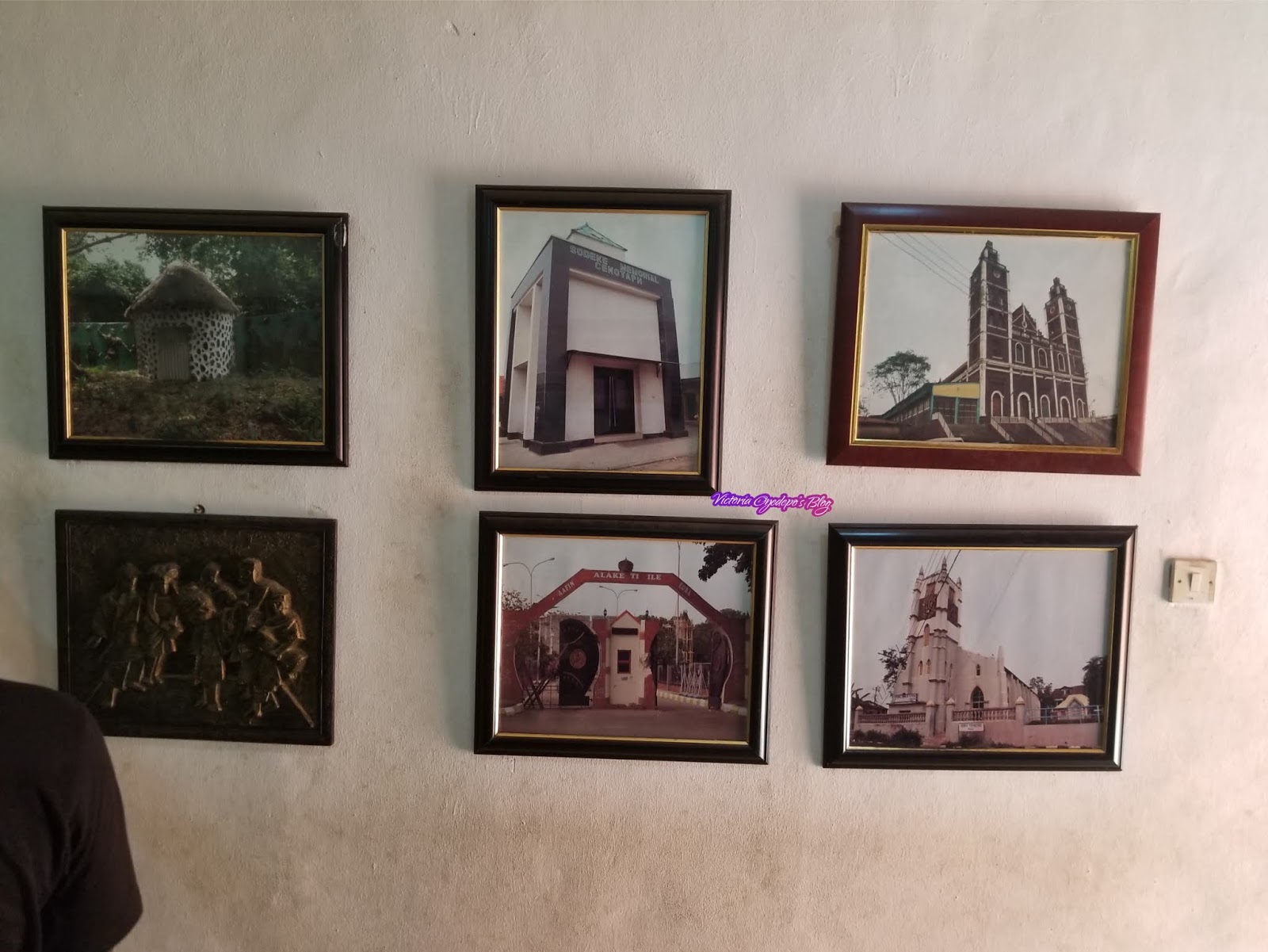 Immediately I entered, I was taken to the craft store, shown artwork by local artists, Of course, this is an opportunity to make money off tourist but cameras or pictures were not allowed. There is also a gallery in the complex where I was told the history of the rock and what to expect. 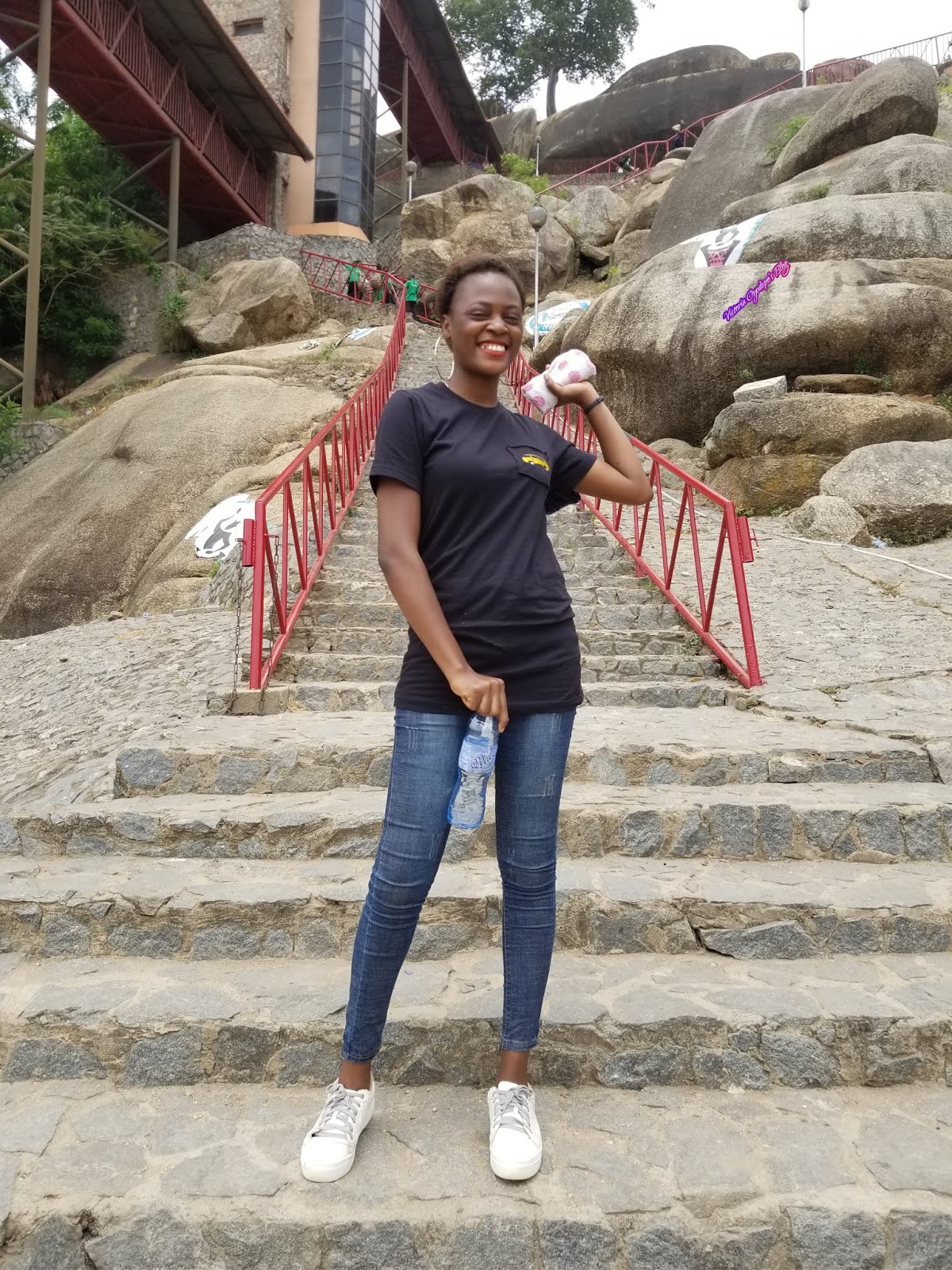 Before I climbed the rock I got a bottle of water because I was dehydrated, little did I know that was just the beginning of my water diaries😂. Ensure to take a bottle of water up the climb because you will be dehydrated at some point. There was a tour guide to take us up the rock. It is safer and I enjoyed the delivery of the history lesson. My tour guide was knowledgeable and very happy to take pictures for us, the majority of the pictures posted here was taken by him. Just in case you visit his name is Mr. Dauda. Tour guides do not charge a standard price/they aren’t allowed to but feel free to tip them. 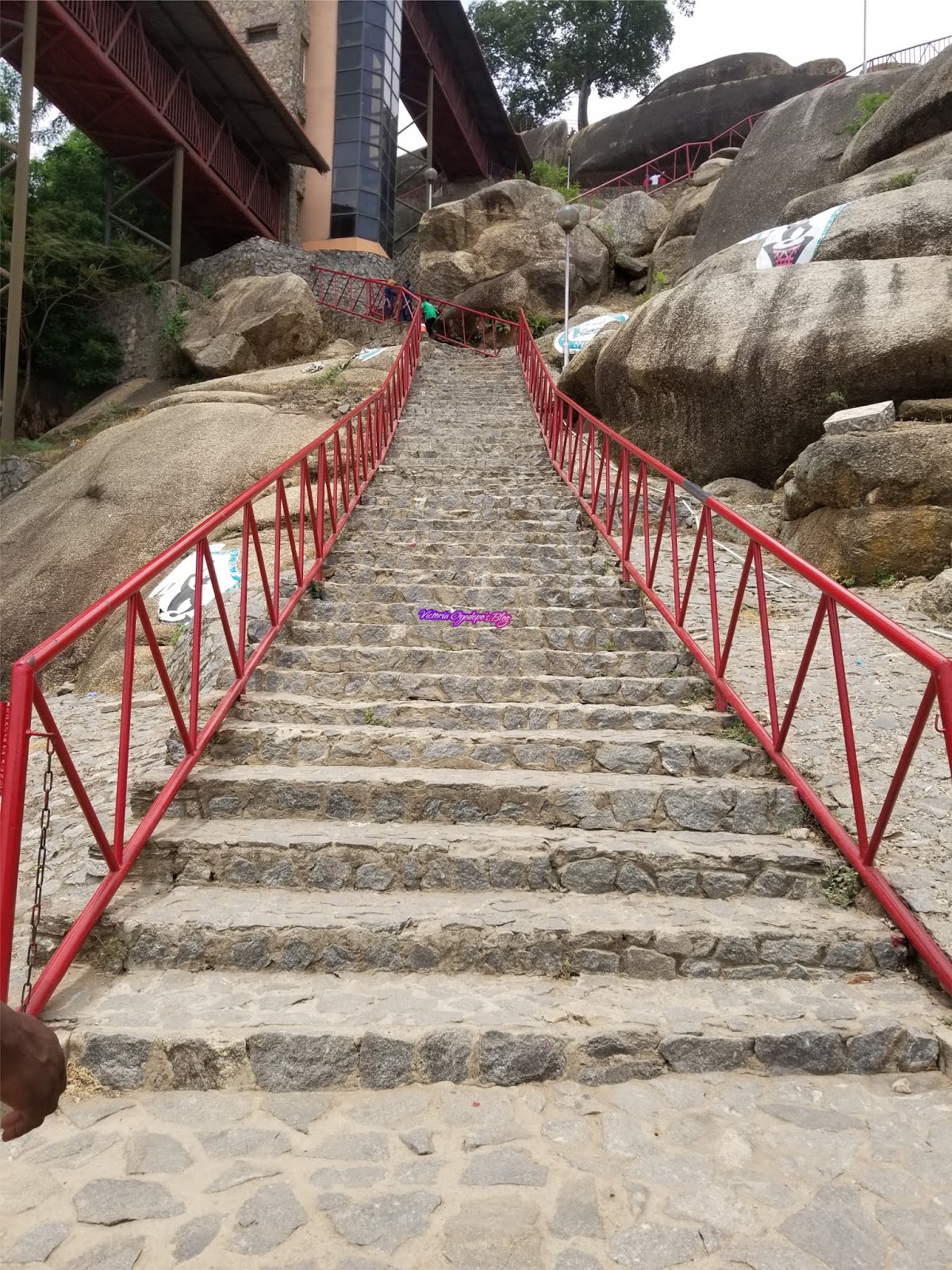 This was the beginning of the climb. Olumo Rock is Abeokuta’s most popular tourist destination. It acted as a fortress during the tribal war in the 19th century. We started by climbing the 122 stairs to the “midpoint” of the rock where we saw the hideout of the Egbas during the inter-tribal wars in the 19th century. We saw the caves which were converted into “apartments” for abode while they hid.

The culture here is very rich, the shrine is still being used and there is a high priest too (we didn’t see him, though). 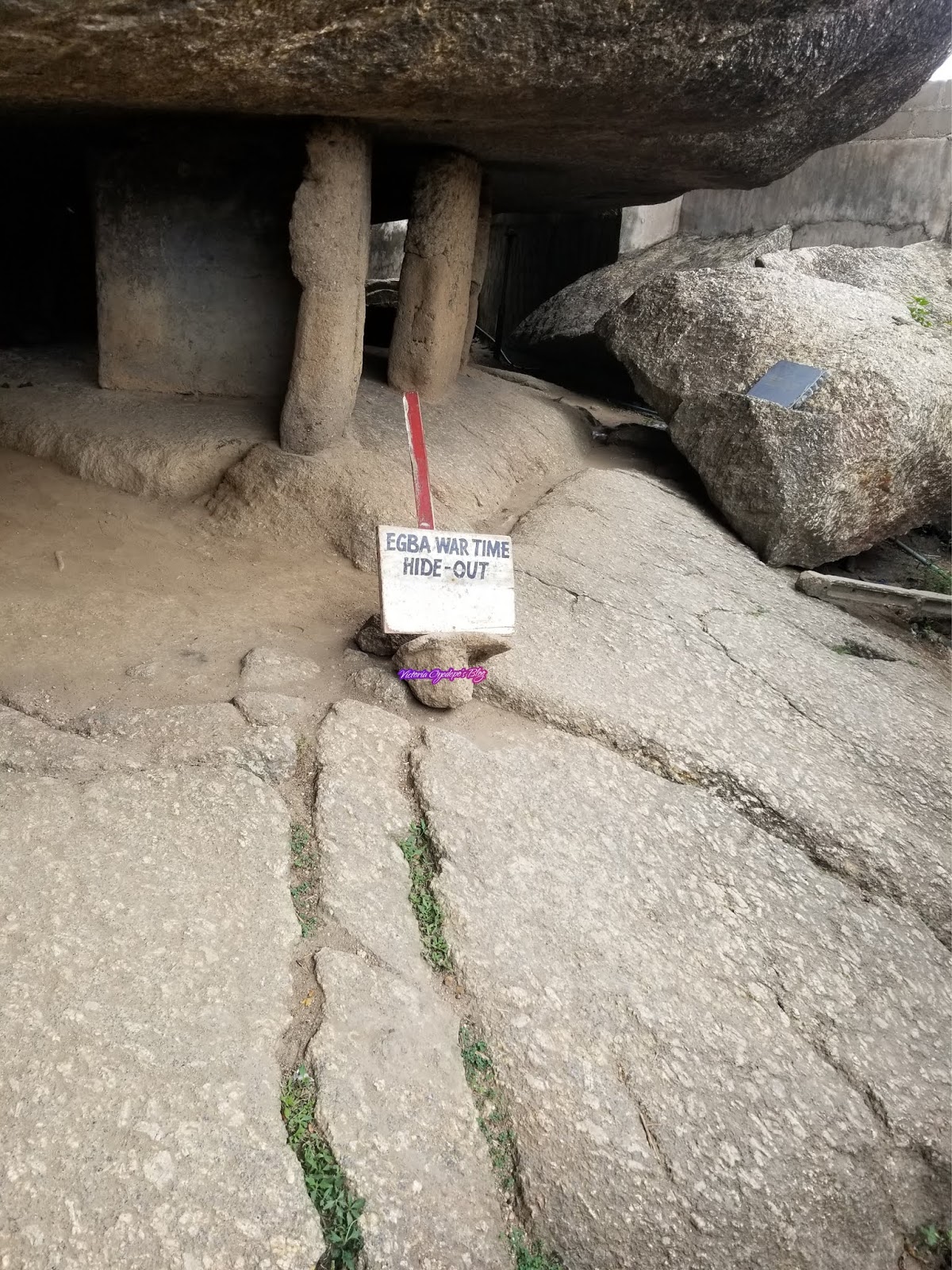 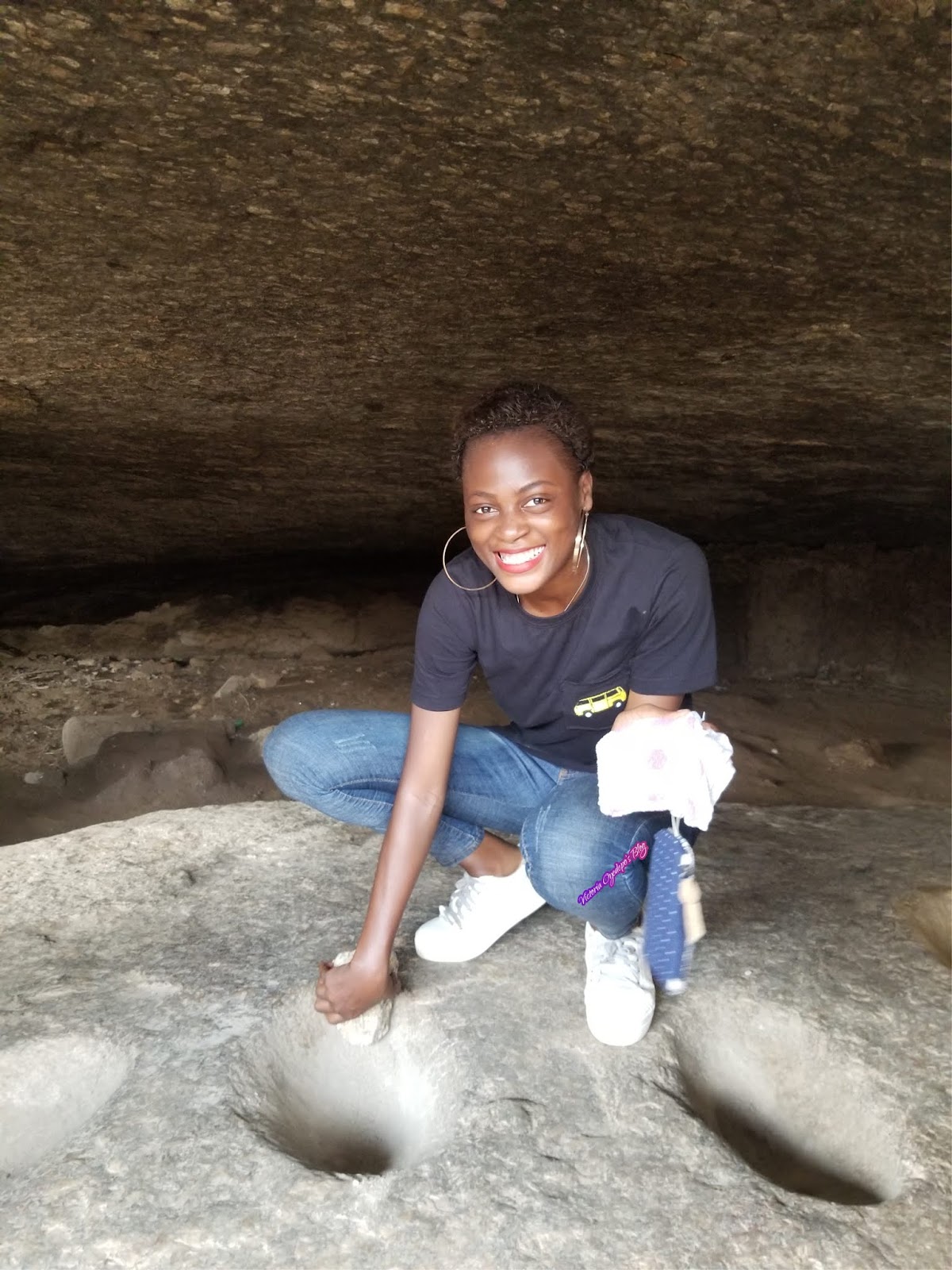 The part of the rock where the warriors “squatted” for days while they fought the famous war and how the name ”ABEOKUTA” was coined from ”UNDER THE ROCK”.

Related- Fun things to do at Whispering Palms Resort in Iworo, Badagry 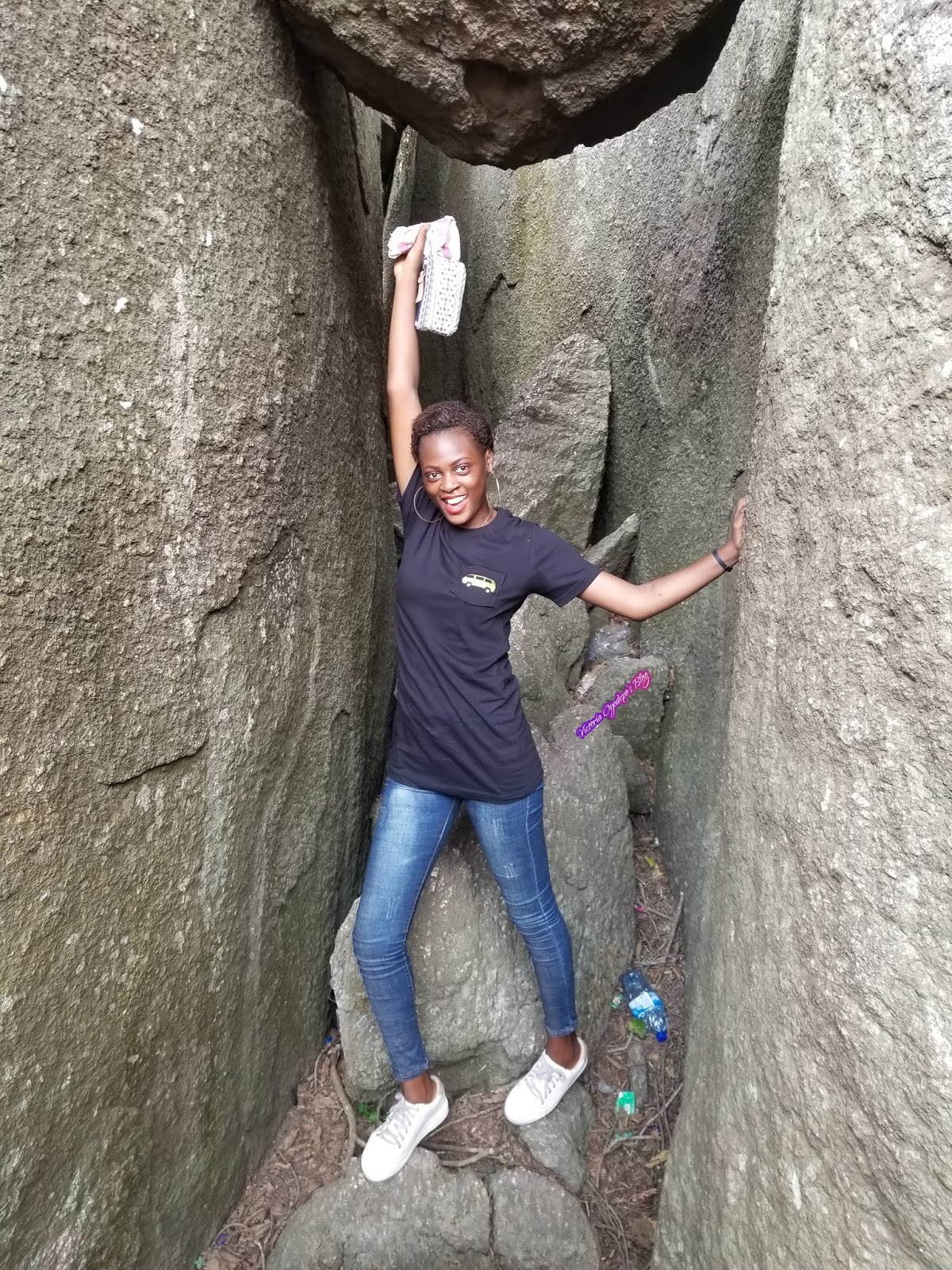 The tour guide will make you navigate the rock, it means you’ll crawl through some crazy stuff. It’s dangerous, but try not to miss it. I came in a sneaker, but because I was so scared I felt the sole couldn’t get enough grip on the rocks and wanted to remove it but was talked out of it. Be sure to wear something that won’t slide on a tile, I will advise you not to go on a rainy day. Make sure to dress appropriately, wear trousers/leggings and trainers for the climb. Ladies and Women, please avoid wearing skirts, gown or tying wrapper to climb the rock except you want to admire the rocks from the base. 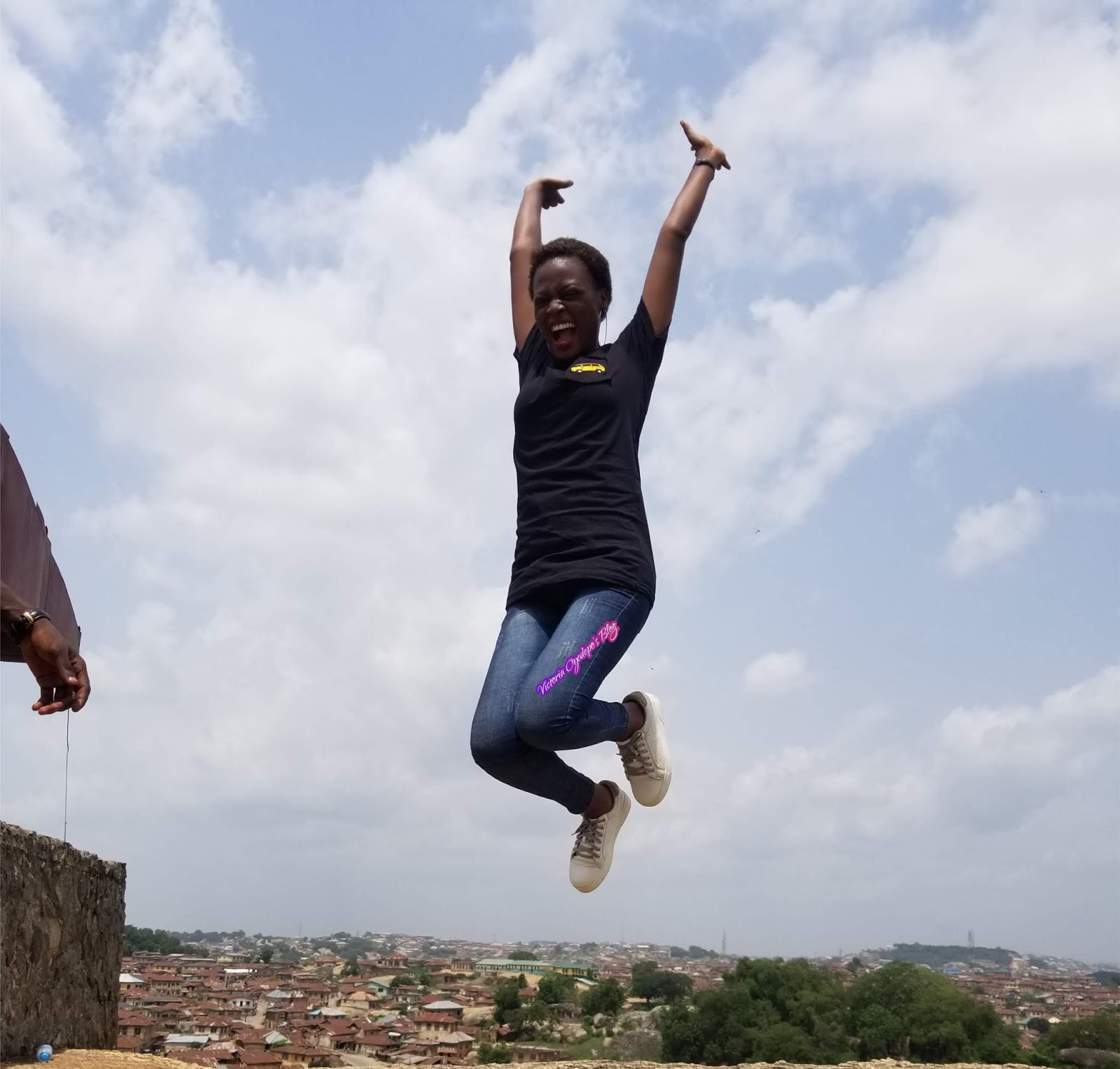 GUESS WHAT??? I am actually scared of height🙈. I had to ask the tour guide if anyone had fallen off the rock when I got to a part that seemed very narrow, he said that no tourist or local has ever fallen from the rock before! which is a very good one! He then encouraged and helped me to climb further. His words were the only reason I made it to the Top of the rock. There is actually an easy way which is the elevator but it is non-functional and practically out of use. Visitors have to make do to reach the top of the rock by the stairs or by the traditional track ( the point of the trip is the climbing itself). This rock holds and tells a lot of history. It is indeed a natural wonder. The apex of the rock is about 300 meters above sea level and from here you can almost practically see all of Abeokuta town! For lovers of arts and craft and natural scenic beauty, visiting this rock is a must. 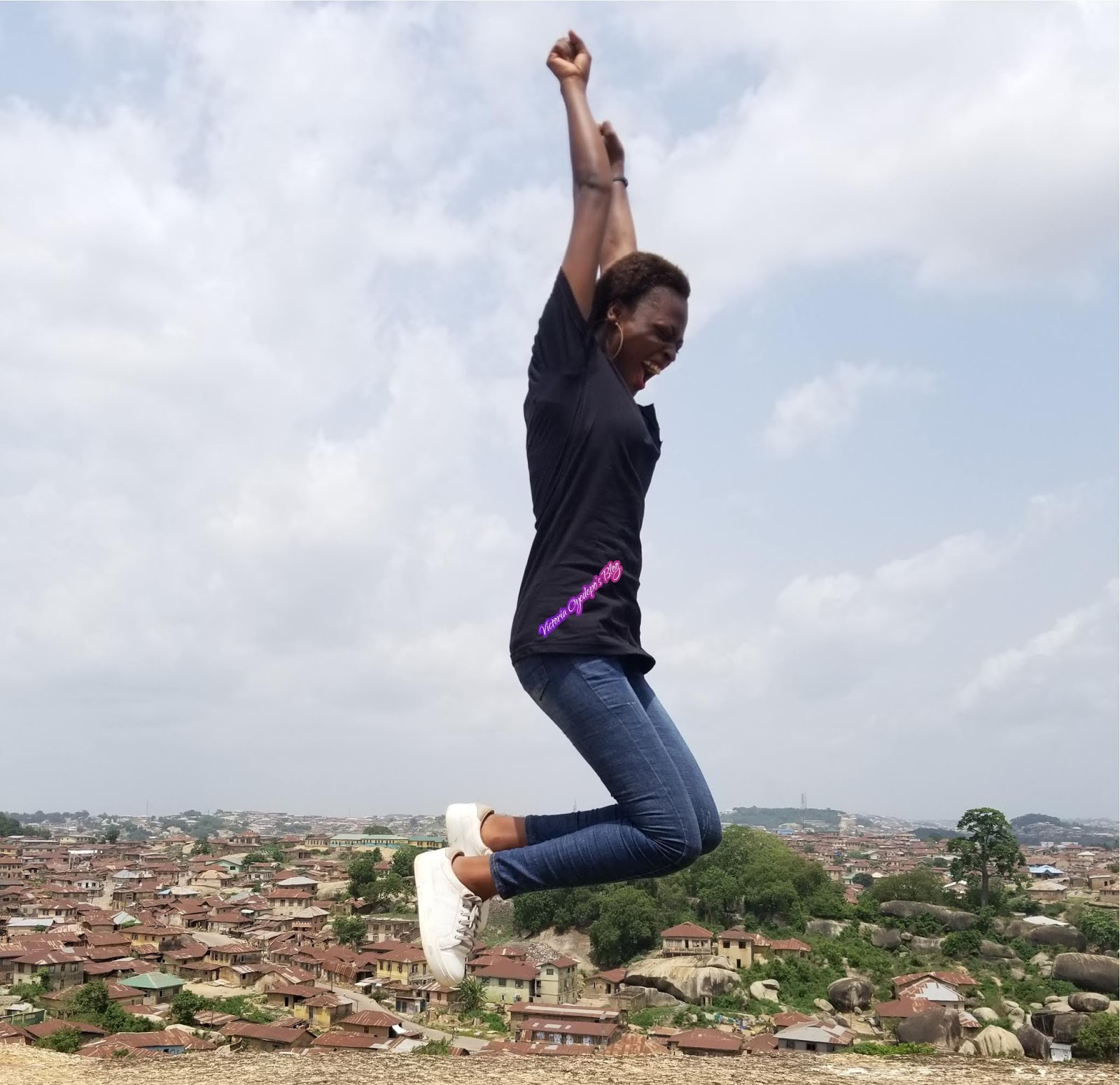 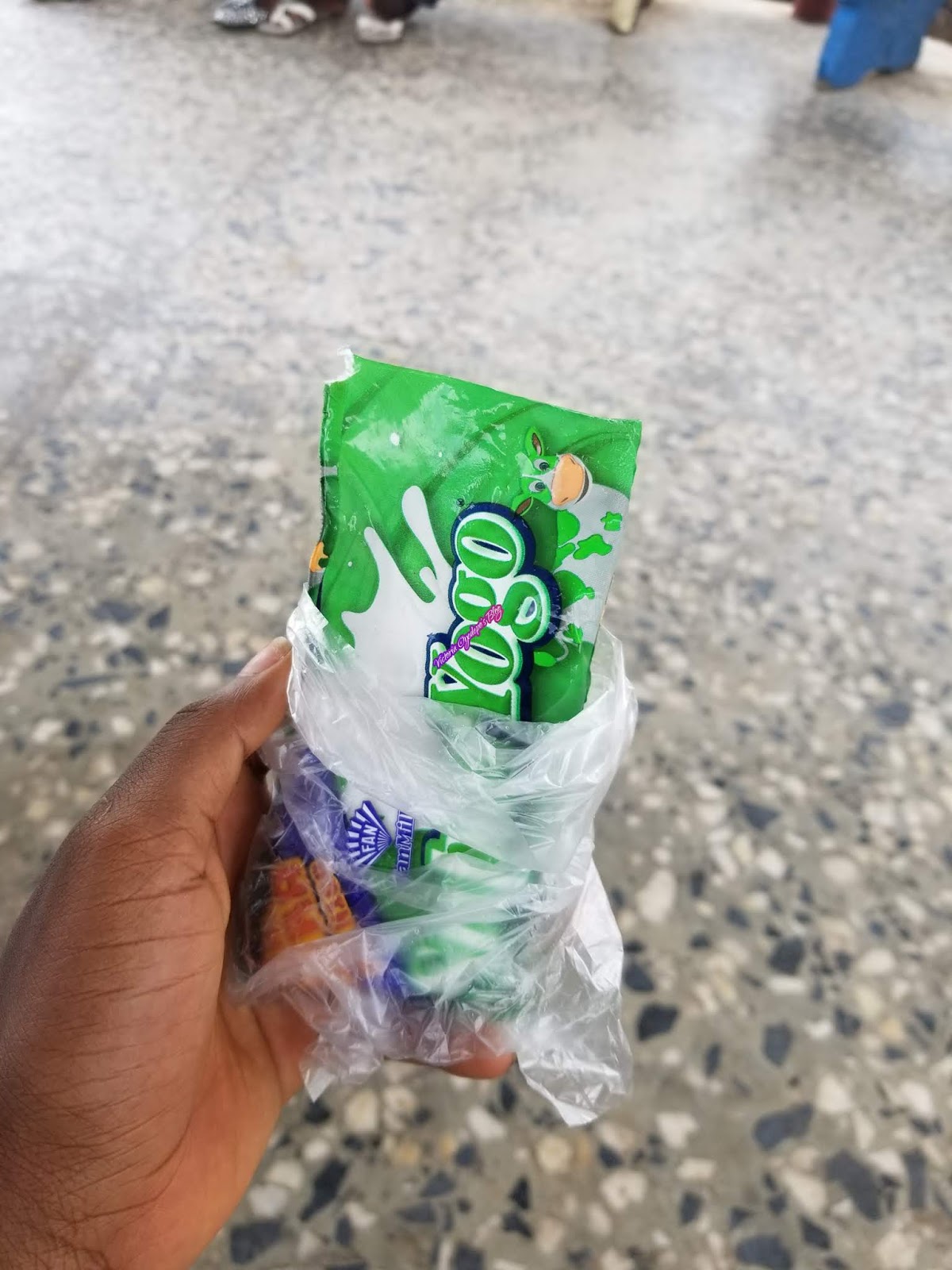 After all the climbing you will be dehydrated, I mentioned earlier the importance of having bottled water with you. At the topmost part of the rock, there was a mini shop where a man was selling light refreshments so I settled for yogurt. 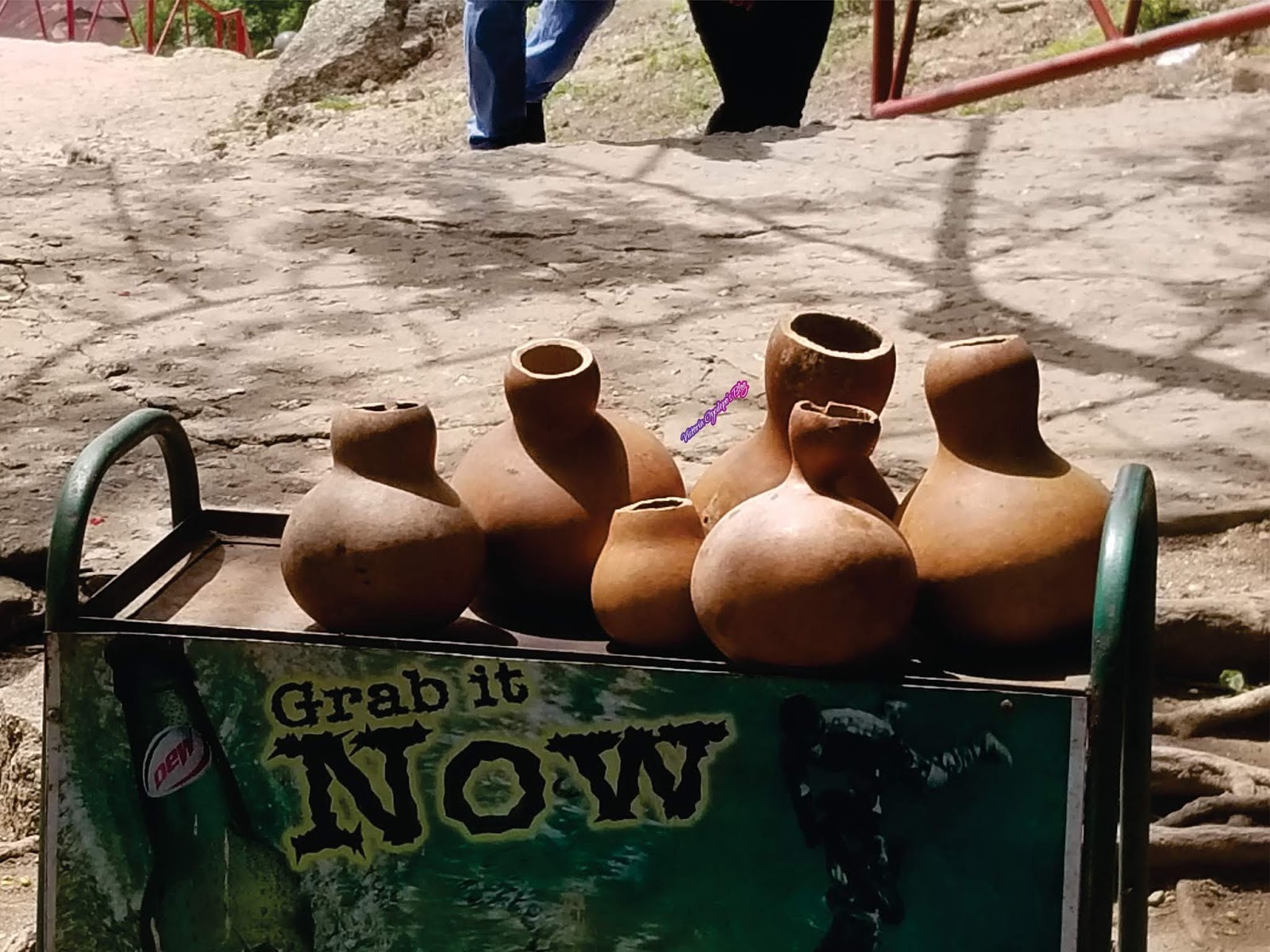 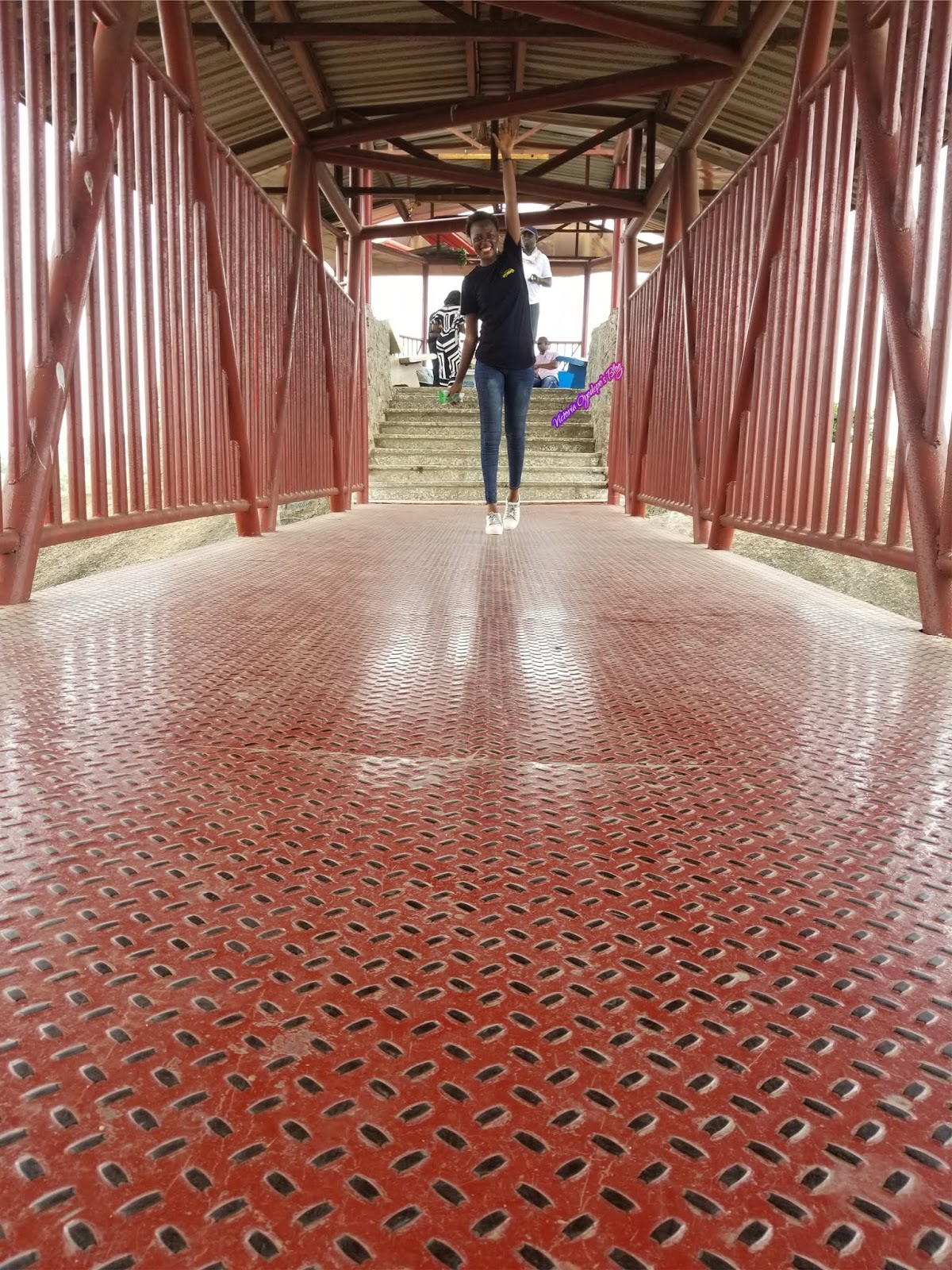 Coming down was easier just like descending. I made use of the pathway.

The lift was not working when I visited but it was a good exercise, a strenuous one at that. Your face towel should come in handy too. The weather was not exceptionally harsh but was a bit sunny. 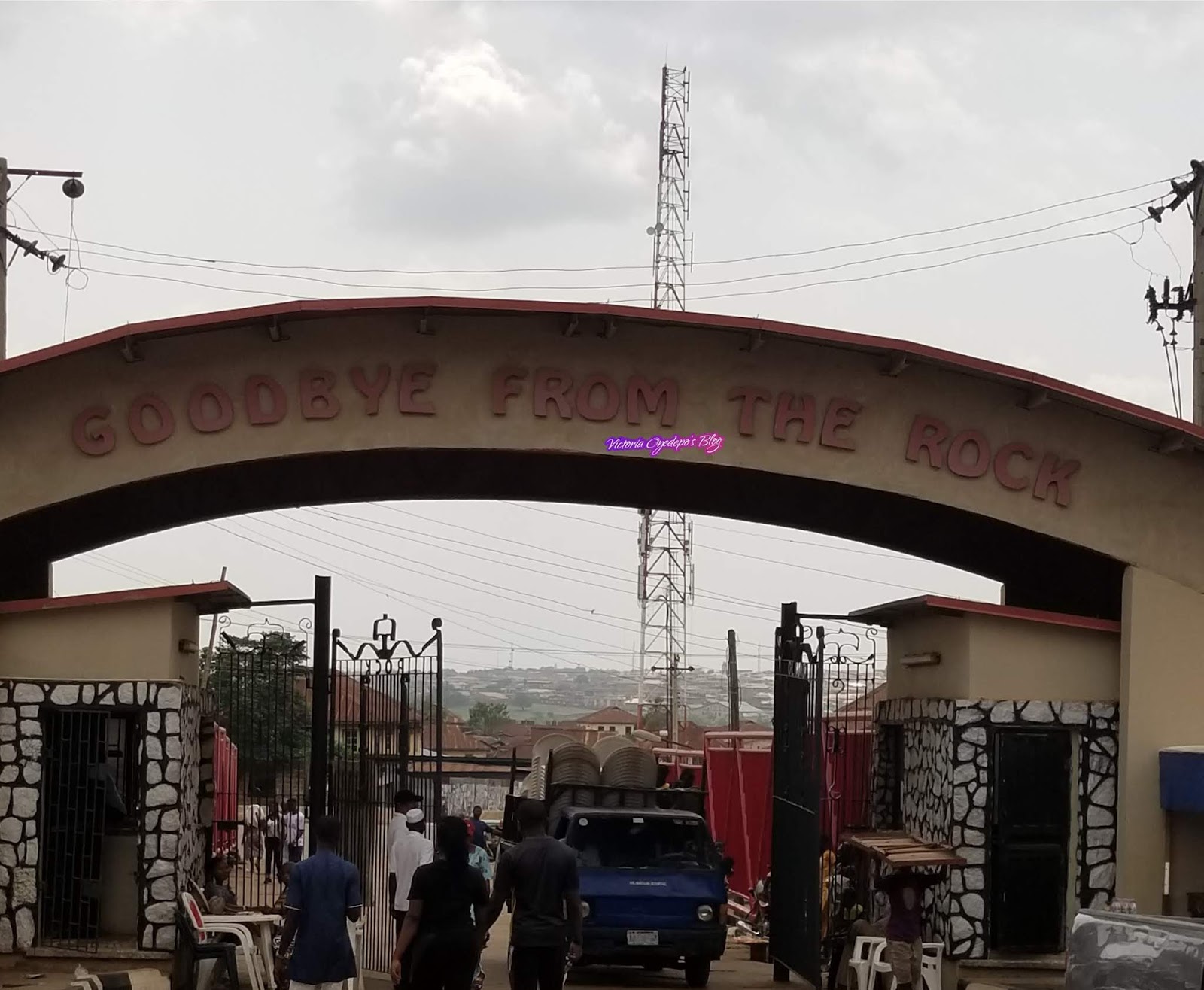 Cons of my visit which I think can be improved upon

1. Maintenance
I think their maintenance culture needs to be improved on. I couldn’t take some pictures because I was irritated by the sights of some things and I decided I will rather not have the picture. Some examples are the elevators and the graveyard of the first tour guide, I was actually recording a video but when I sighted it I stopped and deleted the video.

2. Uniformed guides
I am worried that the guides are not professional guides. They do it for what they can get which to me affects the depth of their story.

3. Website
When making inquiries online for the entrance fee, activities, facilities and appropriate location of the rock I realized there was no official website which made me make use of the few information I gathered online. I hope that an official site is created for Olumo Rock where visitors can be directed to and all proper inquiries made.

Hope you enjoyed it and the information was useful? Tell me your thoughts in the comment section, I will defintely respond to it

MY EXPERIENCE AT THE YOUTH PRE-CONFERENCE ORGANISED BY SOCIETY FOR ADOLESCENT AND YOUNG PEOPLE'S HEALTH IN NIGERIA: IDEAS WORTH SHARING TO BROADEN YOUR HORIZONS