LIVING ABOVE THE SYSTEM BY ADE ASH 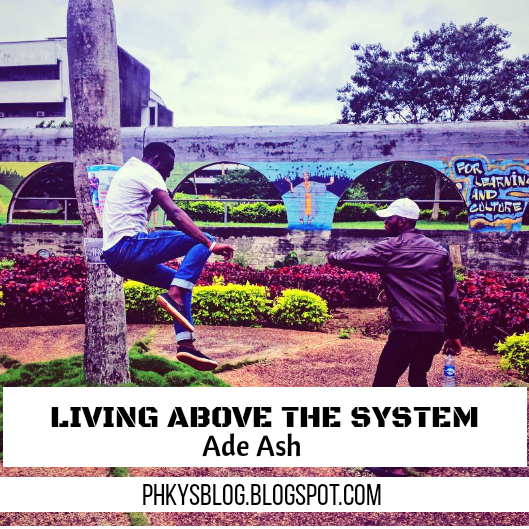 Prologue; In M j’s words, “they don’t really care about us.”
For soo long you hear them say, you are the future!
You are the ones to change the system. My question is,
What is the system, and who runs the system?”
I am positive we know the system is a mechanism of both human and machine efforts geared towards operating a functional society i.e. the system is like a control room; the motherboard that makes all other part functional.
Consequently, the next question is, who runs the system? It’s definitely not me and it’s not you either.
It’s sad when you think about it and even worse because it feels there’s nothing we can do about it. I don’t want to be myopic or be biased which will lead me to think that politicians alone run the system, No! The system cuts across every threshold of human status, commoners and middle class inclusive.
Going further, we must realize the system is not some scientific thingy that can be corrected by carrying out diagnosis, experiments and observations, No!
The system is human; it breathes, moves, sees, perceives and has a soul. The system is also very controversial in nature. It is not mapped out in a way that is easily understood and the media, the most potent tool of the system is used to deceive us on a daily basis (BBC, CNN, Facebook, Instagram, twitter, radio). I do not mean any disrespect to journalist or presenters but at the same time we must not be fooled with fake reality. So, for so long the system remains the system, all we will get are the byproduct of the system which include: corruption, nepotism, mismanagement of funds, lack of social amenities, poor educational system, murder, hate, war and so on).
I like to draw inspiration from Bob when he said, “none but ourselves can free our mind.” This means you have a choice. The question now is, have you freed yours?
In reality, whether we like it or not, we are a part of the make-up of the system i.e. regardless who you are, what you do, the actions you take, they all matter in the system. I want us to stop thinking the system is beyond our reach for it were so we wouldn’t have a phenomenon such as a “revolution”, bloody or bloodless.
Quite frankly, I would love less of, the ‘system is this… the system is that’. Instead, damn the system and live your life not being limited by the shortcomings of the system. Truth is, the system doesn’t care about you, but if you trust you and your abilities, then you will live above the system. You don’t need any more conceiving or convincing, there are peeps out there defying the odds. Peeps who nobody gave a chance but are now the movers and shakers of our world. You know them, I know them and I believe we can be better than them. These are peeps who are turning their dreams into a working reality.
It’s really about
More guts, less bluffs.
More actions, less talk.
More dedication, less procrastination.
Above all FAM, find time for the things that make life worthwhile.

THE PRINCIPLE OF UNIVERSALIZABILITY: A SURFACE LEVEL REVIEW BY ADE ASH

DOES WORKING WITH A TEAM MAKE ROOM FOR MORE CREATIVE IDEAS?

NEYMAR IS NOT A PERSON