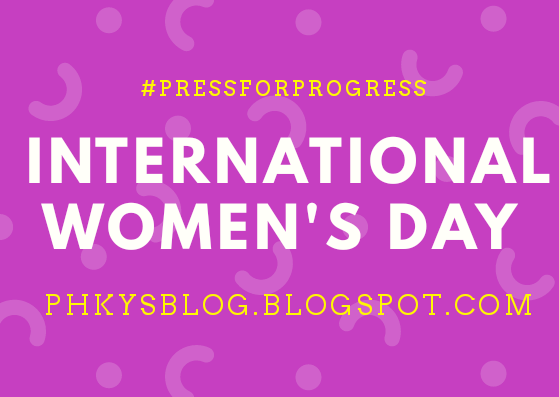 No one has the power to make you feel inferior,
I feel you are the most superior,

The world does not even know the power you possess,

The distance you have travelled,
You are the one, who has made the world so beautiful,
The world wants to celebrate your wonderful presence on this earth,
Enjoy your day specifically built to bring in light your hard-hitting struggle,
Cheers to the whole female fraternity!!

International Women’s Day is a day of recognition and celebration of women all around the world. It’s one day of the year that recognises the value that women bring to individual communities and collectively to the world, and showcases the incredible struggles of women who have paved the way for others.

The IWD campaign theme for 2018  is Press for Progress. International Women’s Day is not affiliated with any one group, but brings together governments, women’s organisations, corporations and charities through talks, rallies, networking events, conferences and marches.

Women face lots of challenges in the world. To paraphrase Snoop Dogg, being a woman ain’t easy. In our patriarchal society, there are all kinds of daily challenges women face that men simply don’t have to deal with — after all, that’s what happens when you live in a culture that’s structured to benefit one gender over another. As much progress as the fight for gender equality has accomplished over the course of decades, women’s rights still have a long way to go.

Even in the modern day, we’re expected to force ourselves into all the boxes society gives us, and there are a few big issues that get the most media attention: The harassment, equal division of childcare, media representation, and discrimination in the workforce and politics. That being said, sexism is frequently more subtle than most people realize. The challenges we face go beyond other people’s sexist behaviors (although those certainly add to the problem). In fact, much of the sexism we experience is imposed on us by cultural expectations rather than meninists and Internet trolls, whether it’s the pressure to be sexy all the time or lack of representation in the media.

Below are  some daily obstacles women have to deal with.

1. We are Expected To Compete With Other Women
One of the most harmful narratives out there is the idea that only one woman can succeed at something. You can see this in media, where women are pitted against each other and expected to shed their feminine characteristics to get to the top.

2. We Can’t Travel Alone
Between street harassment and the very real threat of violence hanging over our heads every day, women have more to worry about even when they simply go out in public alone, let alone when they travel. It’s possible to travel solo, of course, but women have to weigh the consequences in a way that men rarely do.

4. Our Interests Are Devalued
It’s a sad truth that as soon as women become associated in something, it automatically loses status in society’s eyes. You can see this in the workforce — when more women enter an occupation, it frequently loses respect — as well as female-dominated fandoms, which are largely looked down on in other corners of the Internet.

5.  Doing Anything On Your Period, Ever (If You Have One)
It’s an undisputed fact that periods are The Worst, but for some women, they’re debilitating. However, the stigma surrounding periods is so strong that women are expected to suck it up and go about their business, even if their cramps are so severe they’re running to the bathroom to throw up every 10 minutes.

6. You’re Told It’s All In Your Head
As much as you may try to explain how the patriarchy hurts women (and men!), some people just aren’t going to listen. In fact, they’re probably going to tell you that the misogyny you’ve experienced is all in your head — after all, surely decades of campaigning for gender equality means sexism is over. It’s not, of course, but unless you experience it firsthand, it’s easy to rationalize sexism away as the result of being too sensitive. Not only is this infuriating, but it also serves to perpetuate the cycle of sexism.

7. “Smile!”
Are you also tired of being told to look happier whenever you leave the house? Even if you’re sick, tired, just plain cranky, or any combination thereof, women are expected to be physically appealing at all times.

In a patriarchal system, International Women’s Day was a way to put women on the map, but every day is still men’s day, so we still need time in the calendar to recognise women. To take a step back and appreciate who women are as mothers, as entrepreneurs, as community leaders, as young women of vision, as girls rising up to fight the modern-day struggle one hundred years since some women got the right to vote.

HOW CAN WOMEN PRESS FOR PROGRESS DURING THIS YEAR’S  IWD?

1. Work out what you’re passionate about, because your passion will always lead you to your purpose.

2. Support the people in your community and use your influence. People think that influence is reserved for the rich and the powerful, but that’s not the case. What’s great about our era compared to the era of the suffragettes is the powerful tool of social media. It’s incredible how many other people will feel the same as you if you put a shout out on social. Even a Tweet qualifies as an action, so take that step!

3. So make International Women’s Day YOUR day and do what you can to truly make a positive difference for women. Press for Progress

I, Victoria Oyedepo will Press for Progress and challenge stereotypes and bias.

My shout out goes to all the women who support each other, women who help other women in BECOMING the best version of themselves. Women who daily and constantly inspire other women.

I celebrate all the amazing female fraternity striving so hard to effect a positive change. Keep doing what you are doing, the world awaits your manifestation. Keep pressing, keep pushing, keep progressing. You are loved and remembered always. Cheers to your strength and determination.

WE ALL MAKE MISTAKES

FOCUS ON THOSE WHO APPRECIATE YOU

I WISH YOU A MERRY CHRISTMAS