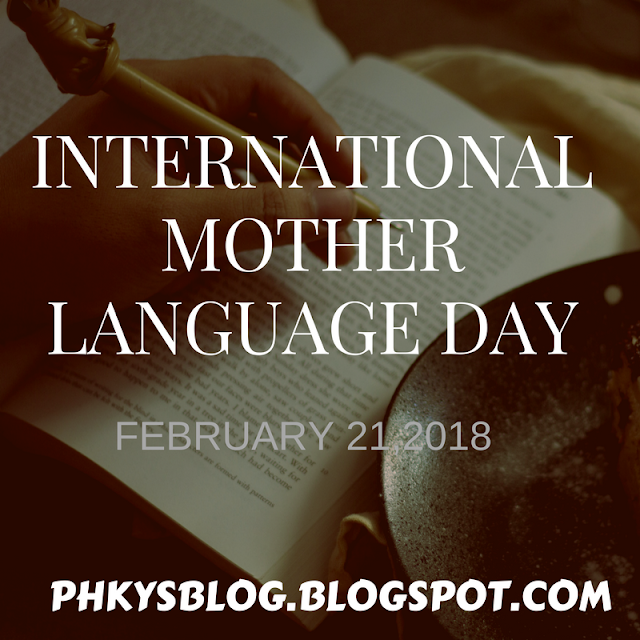 If you talk to [someone] in a language [he or she] understands, that goes to [the person’s] head. If you talk to [somebody] in [his or her] language, that goes to [the] heart.
– Nelson Mandela
International Mother Language Day (IMLD) is a worldwide annual observance held on 21 February to promote awareness of linguistic and cultural diversity and promote multilingualism. First announced by UNESCO on 17 November 1999.
Being exposed to the existence of other languages increases the perception that the world is populated by people who not only speak differently from oneself but whose cultures and philosophies are other than one’s own. Perhaps travel cannot prevent bigotry but by demonstrating that all people cry, laugh, eat, worry and die, it can introduce the idea that if we try to understand each other, we may even become friends.
– Maya Angelou, Wouldn’t Take Nothing for My Journey Now
“Everyone is entitled to all the rights and freedoms set forth in this Declaration, without distinction of any kind, such as race, colour, sex, language, religion, political or other opinion, national or social origin, property, birth or other status..”
For me, words are a form of action, capable of influencing change.
– Ingrid Bengis
Language has social, cultural, spatial and even temporal implications. It is at once personal and public. In order to celebrate different languages and promote linguistic and cultural diversity, February 21 has been celebrated as World Mother Language Day, since 2000. Language, much like society, evolves with time. Some words lose relevance, while others are created. Of those, several go on to be used more and more frequently. The English language too has evolved and many of the words today’s generations use might sound bizarre to their predecessors, but they have become an integral part of modern lexicon.
Language is a city to the building of which every human being brought a stone.
– Ralph Waldo Emerson
Linguistic diversity is increasingly threatened as more and more languages  disappear. One language disappears on average every two weeks, taking with it an entire cultural and intellectual heritage.
This year, UNESCO commemorates the 70th anniversary of the Universal Declaration of Human Rights and its bold statement that ‘no discrimination can be made on the basis of language’, and celebrates its translation into more thanno discrimination can be made on the basis of language’, and celebrates its translation into more than 500 languages.
International Mother Language Day is celebrated in memory of the four students who were killed while fighting for their mother language and is celebrated to tell them that we will never forget their sacrifices
The day also promotes mother tongue-based multilingual education, particularly in early years of schooling, and its development in public life.
Credits
UNESCO.ORG

THE HEART HAS JUST ONE DOOR

WHAT IS THE ONE STEP YOU CAN TAKE RIGHT NOW TO MOVE CLOSER TO YOUR GOAL?

HOW TO WEAR; SUSPENDER PANTS