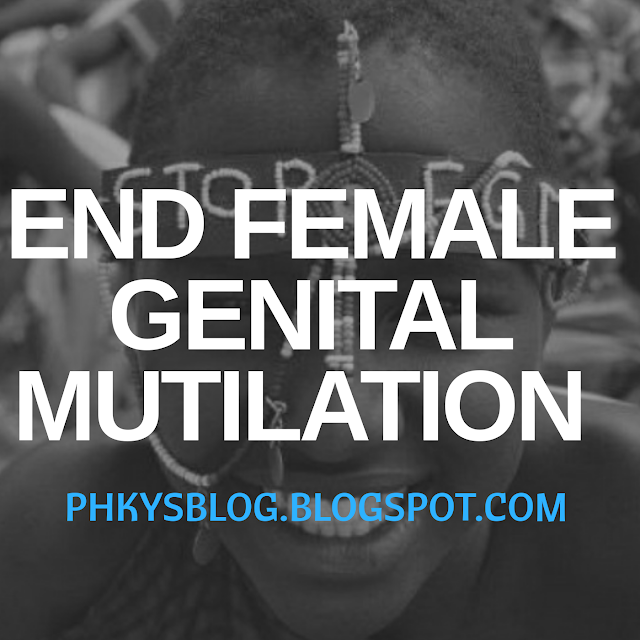 Female Genital Mutilation. According to the World Health Organization  (WHO), it includes all procedures involving the partial or total removal of the female genitalia for cultural and or non-medical reasons.
Sustainable development demands full human rights for all women and girls. The 2030 Agenda for Sustainable Development promises an end to this practice by 2030.” — UN Secretary-General António Guterres
According to NDHS 2013 report, about 19.9 million Nigerians representing 27% of women and girls ages 15-49 in Nigeria have been cut. That’s just so sad.
The external female genitalia is the reproductive part of the female body between the legs. It includes the outer lips (labia majora) and the inner lips (labia minora) which is pink in colour. The clitoris, a small and sensitive organ on top of the inner lips, is also part of it.
FGM is commonly called female circumsicion. It however does not fully explain the act. Female Genital Mutilation or Female Genital Cutting (FGC) comprehensively expresses the reality of the act as explained by the WHO definition. As such the word-  Female circumcision cannot replace Female Genital Mutilation.
Unlike most cases of male circumcision,  Female Genital Mutilation causes physical injury and also leaves a life-long emotional scar and pain for girls and women who are survivors.
In Yoruba language, it is called “Di dabe fun omo obinrin”. In Igbo language, it is “Ibi Nwanyi Ugwu” while in Hausa language it is “Kaciyan mata”.
The act of Female Genital Mutilation is carried out by Traditional circumcisers,  Traditional Birth Attendants (TBAs) and health workers such as midwives and Community Health Extension Workers (CHEWs).
HOW EXACTLY IS FEMALE GENITAL MUTILATION DONE?
It can be performed in the hospital with sterilized instruments to enhance hygiene and avoid infection.It is also done using crude tools like knives or scissors made by local blacksmith. Some use razor or other sharp objects. The girl is held down by the circumcisers, sometimes with assistance, and then the act is done. Sedatives and disinfectant are not usually used. In some places traditional medicine like herbs or fluid from a snail is applied to aid healing of the wound.
WHY SHOULD FEMALE GENITAL MUTILATION END?
Since FGM has no verifiable health benefit, ending it will help stop a form of sexual violence against future generations of girls and women as well as protect their human rights.
The practice violates the rights of women and girls to: physical and mental integrity, Freedom from violence, Freedom from discrimination on the basis of sex, Freedom from torture, cruel, inhuman and degrading treatments and right to life (when the procedure results in death)😐😢.
FGM Is a global issue which is commonly practiced in Africa and the Middle East. In Nigeria, the practice is more common in the South than the North. According to Nigerian Demographic and Health Survey (NDHS) 2013, one in four women, aged between 15-49 years has been circumcised.
There are laws against FGM in Nigeria. 10 states including Osun have legislation against FGM. The federal legislation that exist is the Violence against person’s  (Prohibition) Act which was signed into law in May, 2015. Amongst other forms of violence against women, the Violence against Persons Act prohibits harmful traditional praticrsd like FEMALE GENITAL MUTILATION and recommends five years imprisonment term and or #100,000 fine for anyone who carries out the procedure or anyone who engages someone to carry it out.
I VICTORIA OYEDEPO PLEDGE NOT TO CIRCUMCISE MY FEMALE CHILD/CHILDREN WHEN I HAVE THEM.
Credits
Demographic Perspective on Female Genital Mutilation (2013)
Eliminating Female Genital Mutilation: An interagency Statement (2013)
Understanding and Addressing Violence Against Women Information sheets (2013)
All cited references.

INTERNATIONAL DAY OF WOMEN AND GIRLS IN SCIENCE

ANKARA SHORTS FOR THE WEEKEND