HOW TO DEAL WITH SOCIAL MEDIA/CYBER-BULLYING 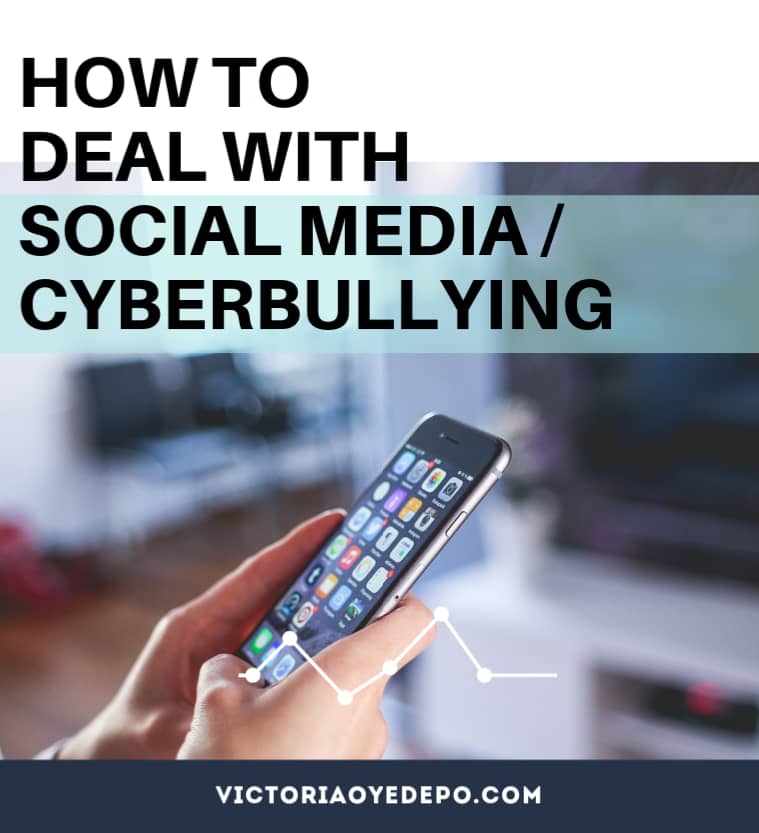 In the last decade, social media has grown to be part of our existence and in recent times, it’s quite difficult for most to really function well without it. Most businesses depend on it for adverts, some individuals use it as a platform to exhibit their talents, some use it as a means to communicate and network while it’s just a form of entertainment to some folks.
Social media has helped quite a lot of individuals, brands and even the government in every aspect. Individuals can now network and help one another, business brands are exposed to a larger audience and government are being careful with their actions and policies because they are certain the eye of the eagle is watching (online audience). In spite of all these amusing opportunities created and good done, like every other thing, it has its negative effects. Obsession, Online stalking, Cyber Bullying to mention a few.
This piece will be dealing solely on Cyberbullying. Cyberbullying is a form of harassment using electronic means. Cyberbullying is when a person or a group of people bully or harass others on the internet, particularly on social media sites. Harmful bullying behavior will embody posting rumors, threats, sexual remarks, a victims’ personal data or uncomplimentary labels (i.e. hate speech). Bullying or harassment are often known by recurrent behavior and an intent to hurt. Victims could experience lower self-esteem, accrued self-destructive thought, and a range of negative emotional responses, as well as being afraid, frustrated, angry, and depressed.
In recent times, there has been a sudden increase in the number of suicide deaths and even more in the number of people with suicidal tendencies, mostly in teenagers. I will be addressing cyberbullying from two perspectives; a potential bully and a potential victim.
As a Potential Bully:
Anyone with a social media presence is a potential cyber bully. In the course of our day to day interaction on social media, we utter things, support and even disagree on issues but what we fail to realize is that we all are not of the same social and psychological construct and this is very vital when it comes with dealing with others. Most times, bullies don’t even consider what they do as a bully because they don’t actually believe that the other person they are talking to could take their actions or words very seriously to the extent of getting depressed.
•    Self-Awareness: The first step towards dealing with bullying is to become aware, know that everyone is different socially and psychologically and a comment you would pass in sarcasm might not be received as sarcasm thereby causing ill feelings on the end of the receiver.
•    Respect Ideology Differences: Secondly we need to understand that people are entitled to their ideologies and it is okay for some people to disagree with our opinion. You don’t have to throw insults or pass derogatory comments just to prove your point to someone, you can only try to make others see from your point of view and if they don’t, you don’t have to insult or abuse them. It just how life is, you’ve got to move on.
•    Avoid giving Savage responses:

You don’t have to be savage for you to appear cool on social media. This doesn’t rule out the fact that sometimes a savage response is needed, most especially in responding to bullying comments. Savage responses should be allowed only to a bully comment. 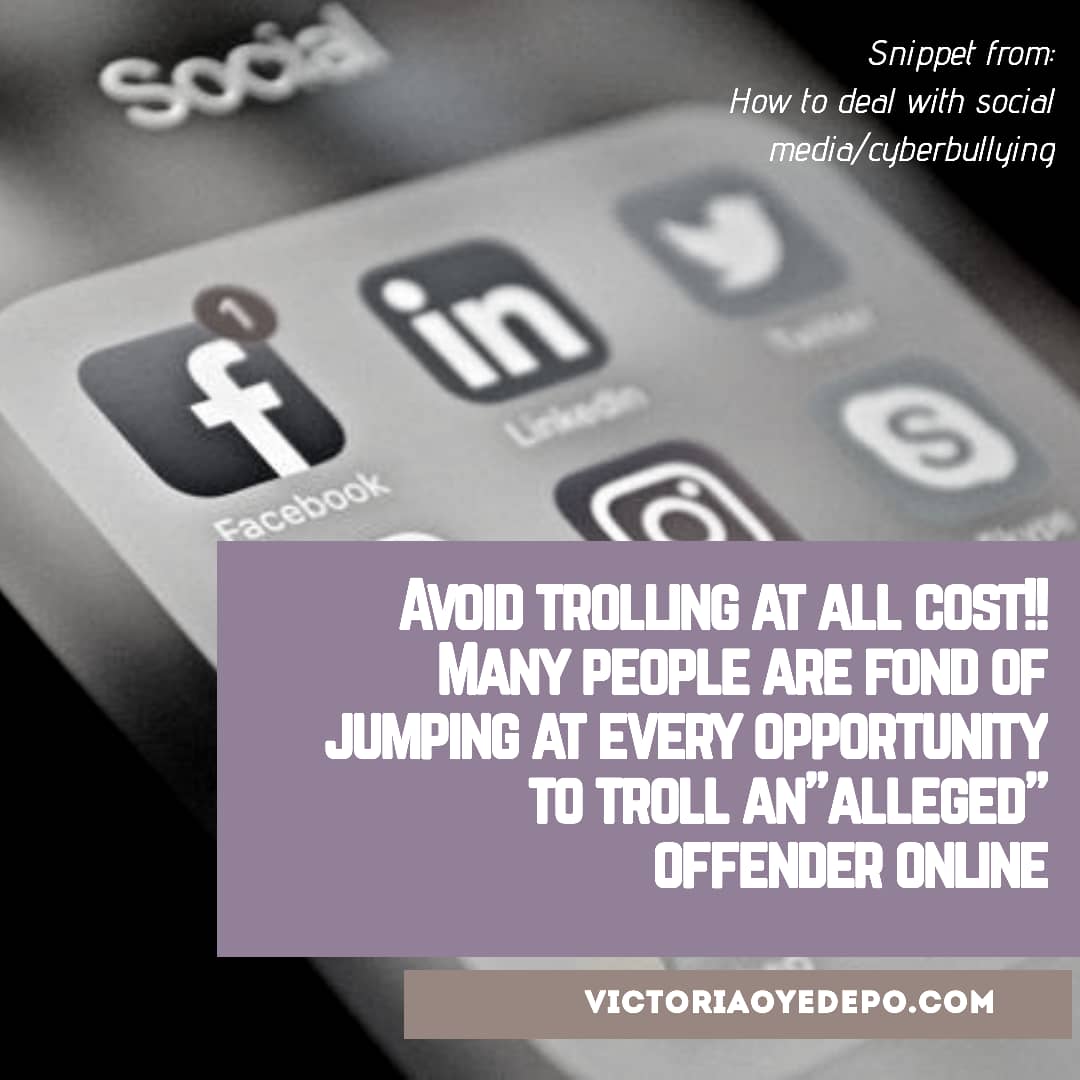 Many people are fond of jumping at every opportunity to troll an “alleged” offender online. Even if he /she is actually guilty, there are so many circumstances we probably do not have an idea of its existence but we have joined the bandwagon of insulting such people. An example is trolling a guy because a girl accused him of rape while you don’t know the other side of the story, everyone goes ahead to start trolling.

A golden rule that I personally have used over the years in dealing with people in real life is Johann Kaspar’s Quote which says; “Don’t speak evil of someone if you don’t know for certain, and if you know ask yourself, why am I telling it?”. I implore you to remember this whenever you’re about to post or comment on social media.
As a Potential Victim
Just like we are all potential bullies, we are all potential victims too. We post what we have on minds, our experience, perspective on trending issues, etc. Then a bunch of people will come under our comment section and begin to shame or pass derogatory comment just because we exercise our freedom of expression. This can take a huge toll on our thinking, restricting our expression, uniqueness, originality and some other forms of expression which makes us who we are. Ideally, we should be free to post whatever we want or feel like is right as long as it’s not illegal, inappropriate and doesn’t hurt anyone.
How to prevent being Cyber Bullies’ prey
➧    Develop your self-esteem: Our self-esteem affects a lot of things and it’s important we pay attention to it. You could start the process of developing your esteem by accepting yourself for who you are; Fat or slim, rich or poor, single or married, et al. Accept everything about yourself, the ones you can change, change because you feel the need to change not because of societal pressure and don’t be ashamed of the process. The ones you can’t change, wear it like an amour, this way it won’t be able to hurt you( Tyrion Lannister, 2009).
➧    Know your Capacity: Naturally, some people don’t do well with sarcasm as they tend to take the most trivial things personally, some are dominators while others are highly opinionated. This will give an insight into the kind of people you should welcome on your social media page.
➧    Build your Social media: We have different tools on our social media page that we don’t consider as tools. We have the block button, privacy lock, like and unlike, follow and unfollow, the bio page and many more. These are options strategically put in place to help people build their social media. We should see these as tools and use them. Almost all social media apps or website uses algorithms that track your activities and uses these to suggest to your friends and pages.
The following tips can help you build a peaceful, cyber bully-free social media
1.    View profiles, likes, and bio before accepting,  sending a friend request or follow someone; this allows you to filter those on your page.
2.    Use your Block button often; once you feel a person’s post is getting to you in a negative way, block the person. (when you block people with some certain attributes, the app stops suggesting people with such attributes and you get to see less of such people). 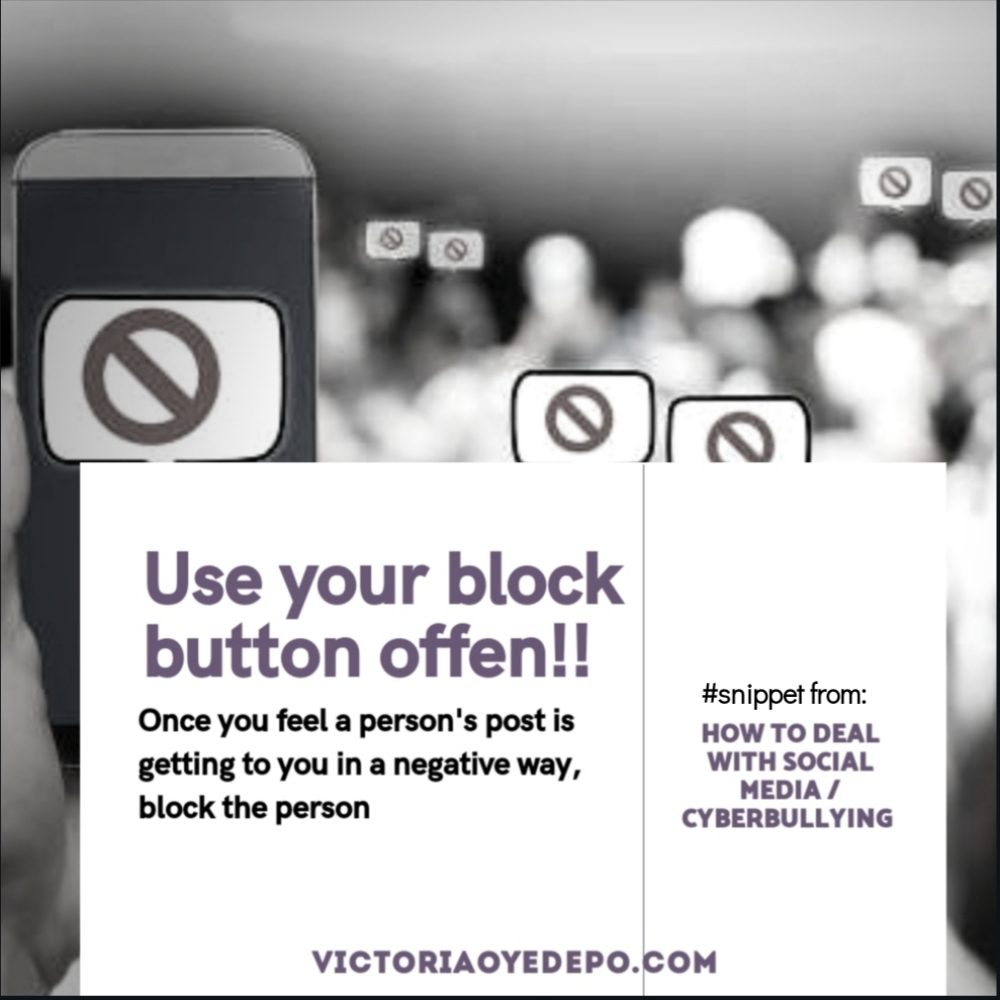 3.    Make adequate use of your privacy option; you can choose to share your posts among friends only; this prevents unwanted people from commenting on your posts.
4.    Report accounts; Report an inappropriate post on your page (the account will most likely be suspended).
5.    Follow and add people who help boost your esteem.
Do you know other tips on how to deal with cyberbullying? It would be nice if you don’t hesitate to share them in the comment segment.

FUN THINGS TO DO AT WHISPERING PALMS RESORT IN IWORO, BADAGRY