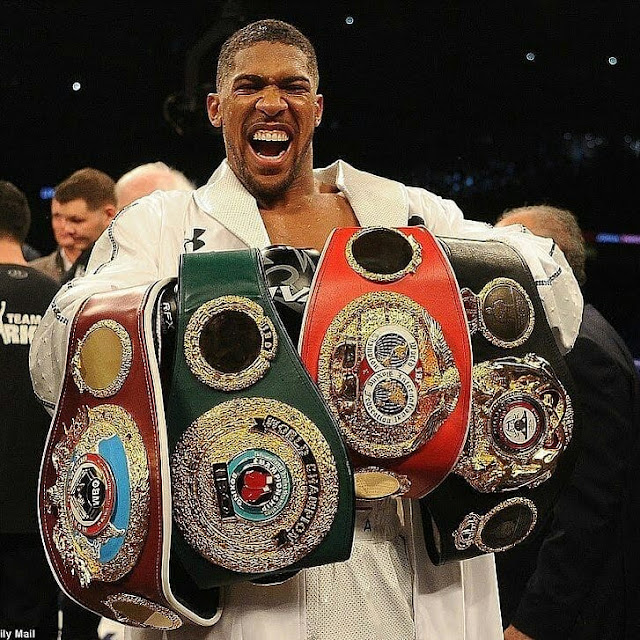 How about we start the month with the worlds heavyweight champion as he extends his clean sheet professional record to 21 wins and 0 losses after winning the heavyweight unification fight against Joseph Parker in Cardiff, Wales.

Anthony Oluwafemi Olaseni Joshua, MBE is a British professional boxer. He is currently a unified world heavyweight champion, having held the IBF title since 2016, the WBA and IBO titles since 2017, and the WBO title since 2018.

Joshua says he now wants Deontay Wilder or Tyson Fury. The heavyweight era dominated for a decade by the great Wladimir Klitschko is over.

He lost his three belts and status as division kingpin by decision to troubled Tyson Fury in November 2015, but the real passing of the heavyweight torch came in Klitschko’s next fight, when Anthony Joshua sent him into retirement by stopping him in the 11th round to retain his belt and win a vacant one 11 months Anthony Joshua was taken the distance for the first time in his professional career before winning a unanimous points decision in his world heavyweight title unification fight with Joseph Parker in Cardiff on Saturday.

Victory extended the London 2012 Olympic champion’ perfect pro record to 21 wins from as many bouts but was the first in which he’d failed to do so by a knockout.

This result was New Zealand boxer Parker’s first defeat in his 25-fight pro career.
Saturday’s contest in front of a 78,000 capacity crowd at the Principality Stadium was the first time two previously undefeated heavyweight champions had met for a world title in Britain.

Joshua’s win should move him closer to a bout against Deontay Wilder, the American who holds the World Boxing Council’s version of the heavyweight title.

He then called for another heavyweight unification fight with Deontary Wilder. It is “not time to sit back and enjoy the ride,” he said after his win.

One lesson I have learnt from this piece is, To be a giant, you have to take giant strides. In life we must take risks and pursue the scariest of goals and plans. Only then shall we be able to know who we really are as our resilience and resolve for success gets put to test.

To make the best of life, take on the giants ahead of you even when you feel scared and the statistics aren’t clearly pointing to your favor.

Its not bad if I dedicate my ringtone for over 3 years to this winner right here. STAND UP FOR THE CHAMPION BY RIGHT SAID FRED.

HOW TO ROCK OFF SHOULDER FOR THE WEEKEND