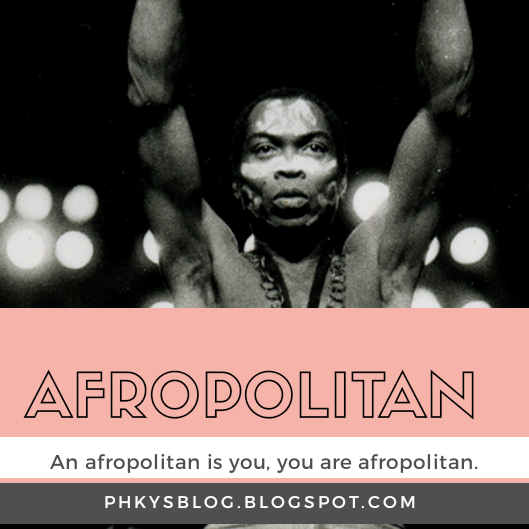 I don’t want to burst your bubble or keep you in unnecessary suspense as to who inspired the piece. It is none other than Fela Anikulapo kuti. Let me take you down memory lane, with the hope you understand what it means to be Afropolitan.
Fela Was sent to London to study medicine but ended up graduating with a B.A in Music i.e an afropolitan doesn’t conform. You can call it being rogue and in society’s view, it is perceived wrong. Afropolitans are absurdists. Now, if you thinking you want to do same, my advice is that you don’t use another man’s yard stick to measure yours. You have to know your own path and resonate with it.
Going further, Fela was never afraid. Even of death and that is why he adopted the name, Anikulapo. Call him whatever you like; proud, bigot or self centered, but the man was sure of himself for he had immersed himself in realism and so understood that death was not the end but the very beginning. His lack of fear got him arrested,traumatized and bruised, but was he broken? No! I remember the scene he was explaining how he got beaten in the back and ass but it made him grow stronger. That is being brash and it comes from self conviction; telling yourself you are not the norm and so cannot be held back.
Spirituality is the foundation on which an afropolitan roots the core of his existence. In some it is very pronounce as in the case of Martin Luther King Jr. In some others it is not so pronounce but evident as in the case of Malcolm X and Fela Kuti. Either ways the coin lands, what is certain is that one’s fate will be known. The fate of an afropolitan is strongly hinged on his/her faith and it is this faith that makes an aura of spirituality envelope their mere presence. They know, and have accepted their higher calling and  will go as far as putting their life in the line to achieve their purpose.
An afropolitan is smart. This kind of smart is not taught in schools but rather it sterns from one’s connection and involvement in happenings on the streets and in the society. Fela knew and felt the yearnings of the masses and often at times wined and dined with them. This kind of smartness was what earned him the reputation as the peoples president.

An afropolitan doesn’t just sit back and rain down

curses on others attempting to do it, they get involved. Contributing their quotas to the progress of the society. It’s a know fact that in our society, people are known to be very good at judging others. To be honest, such persons are timid and will remain like that. They don’t have the strength to get into the arena and rumble. They are cowards who will only be able to talk and not act. We are not such persons and as such we must strive to roll up our sleeves if it feels like others are not getting it right.
An afropolitan is known to make a difference( Go M.A.D) in any capacity he/she finds them self;  you don’t think about yourself alone, you make sure you feed others too. Make sure everybody is eating… We all stay winning. Fela was such a person who made a difference and fed others.
An afropolitan is black not because of the color of his skin, but because of the black roots that flows in their veins. An Afropolitan is you, you are Afropolitan.
This piece is dedicated to all black persons thriving to make a difference.
ADE ASH

HOW TO WEAR JOGGERS